It was 1923, and Las Vegas was slowly emerging from a crippling railroad strike, which hit the community in 1922 and almost wrecked, the town’s economy.  On April 5 of that year, Rotary was born.

Les Saunders, who came here from Southern California to take over as manager of the Chamber of Commerce, sowed the seed.  Seventeen others joined him to form the club’s charter membership.

At that time Las Vegas was a sleepy railroad town.  Moving along Fremont Street from the Union Pacific Depot, you would run out of town when you reached Fifth Street.  The block from Fourth to Fifth, on both sides of the street, was occupied by the then elaborate homes of the Ferrons, the Brackens, the McNamees, the Squires, the Norrises, and several more whose names have been erased by the ravages of time.

There was no glamour along the street such as there is now.  Where the Golden Nugget now stands, on the corner of Second and Fremont, was the E.W. Griffith Building, which housed the post office and a hotel upstairs.  Next door to the post office was the Majestic Theater owned by Pike.  Across the street, the site of the present Horseshoe Club was a vacant lot with the remains of an old foundation covered over with willows.   Where the Fremont now stands was another vacant lot, and on the southeast corner Bill Ferron owned the White Cross Drug Store, with the telephone and power company office in the real on Second Street, and Dr. Park’s office on the second floor.

The business district started fading into residential area about midway between Third and Fourth.  The cross streets between Ogden and Bridger were all residential.  Third and Fourth Streets were occupied mostly by “company” houses, the Union Pacific having built them for their employees prior to the strike.

The Rotary club actually was formed on February 23, 1923.  The founders met in the Chocolate Shop at 203 Fremont, which now is a part of the Golden Nugget.  The Rotary Club of Las Vegas was chartered on April 5 and designated as Club Number 1401 of becoming the first baby Rotarian fell to C.P. “Pop” Squires.  “Pop” was the Las Vegas Postmaster and also publisher of the Las Vegas Age.  He was the editor of The Wheel for some 30 years, and in his later years was made a special honorary member for life for his outstanding and unselfish service to the club and the community.

The Las Vegas Rotary Club won its first honor and distinction by attending three district assemblies (San Jose in 1924, Fresno in 1925, and San Diego in 1926) with 100 percent in attendance. To those in the membership today, that may not appear to be much of an accomplishment.  However, in 1924, ’25, and ’26, it was considered quite a feat.

During the 20’s, there were no paved highways from here to anywhere.  Dirt roads, rut-filled and dusty, moved out of Las Vegas in two directions – north and south to Los Angeles and Salt Lake City.  A trip to Reno by car was almost unheard of, and the road to Needles and Kingman was not much better.  There was no Boulder City, nor Henderson.  Las Vegas was practically isolated.  Anyone needing to go anywhere went by train.  A few hardy souls risked the rigors of the desert by car, but their friends at home considered them real daredevils.

Shortly after the club was formed, the Chocolate Shop closed, and the meetings were moved to the “Beanery”, the Union Pacific dining room just north of the present station.  The Beanery was about the only place in town to eat satisfactorily, and even then, some days, the food was pretty bad.  It is strange commentary that today Las Vegas is considered one of the gourmet’s delight, for back in the 20’s & 30’s, one hardly could find a satisfactory place to eat in town.

The next meeting place was forced on the club by progress.  It came about in 1938 when the Beanery was torn down to make way for the new and modern depot.  So the club picked up its knives and forks and moved to the Kiva Club.  This establishment was in the basement of the Apache Hotel, built by P.O. Silvagni on that vacant lot where the foundation and the willows were back at the beginning of the club.

El Rancho Vegas, which was built by Tommy Hull in 1941, outmoded this meeting place and the club moved its meeting place out on the “Strip.”  Rotary moved again in 1944 to the Last Frontier, where the weekly meetings were held in the homey Canary Room until 1957.  Then there was a great deal of shopping around until the club became “permanently” settled in the Tropicana.

Rotary was growing, along with Las Vegas.  Both the city and the club were looking forward to the start of construction on Boulder Dam, and the community had grown from a population of some 2,000 in 1923 to some 5200 in 1930.

The Boulder Dam Bill was signed in 1929, but before construction of the dam could be started, a railroad and a highway had to be built.  Morrison and Knudsen was awarded the contract for the railroad, and the LeTourneau Construction Company was awarded the contract for the highway from the railhead in Boulder City to the dam site.  The big LeTourneau dirt moving equipment, which is used wherever highway construction or heavy mining is done these days, had its start on Hoover Dam, for the LeTourneau Company designed the equipment used at Hoover Dam and it was the largest ever made up to that time.

Six companies were contractors on the dam because the job was so big that one company could not handle it alone.  Frank Crowe, construction engineer, put together a merger of six companies to do the job, with himself as the chief.  The companies were Utah Construction, Pacific Bridge and Building, C.F. Shea and Son, Bechtel and Kaiser, Morrison and Knudsen, and McDonald Kahn Company.

As the construction proceeded and Boulder City was built near the dam site, members of the Rotary Club of Las Vegas saw an opportunity to expand, and a survey of the possibility of establishing a new club there was undertaken under the leadership of K.O. Knudson, a principal of the old Fifth Street Grammar School, who carried through the sponsorship and founding of the Boulder City Rotary Club.

The Las Vegas Rotary Club has recorded many “firsts”, but probably two of the most remembered occurred in 1927 and 1931.  It was in 1928 that the first long distance telephone service was inaugurated out of Las Vegas.  Up to that time the only service outside of Las Vegas was via the Union Pacific telegrapher’s key.  Telephone service was confined to some 100 or 150 subscribers who had hand cranked phones in their homes or offices.  However, Ed Clark, who was then president of the telephone company, worked out a schedule whereby long distance service became available to the subscribers, and the first long distance phone call was made from Clark at the Rotary meeting to the Mayor of Reno, E.E. Roberts.  It also might be of interest to note that among other phone calls, which were made that day, was one from A.E. Cahlan, a former president of the Rotary Club, to his brother John F. Cahlan, (later to become a member) who was living in Reno.

The second occasion may have been the foundation for the demotion parties, which have become to familiar to Rotary.  It was in 1931, shortly after beer was legalized.  During Prohibition, only 3.2 alcohol content was legal.  Then Roosevelt was elected and he decreed regular beer to be legal.  There was a great hue and cry in Las Vegas at the time, and the whole town was anxiously awaiting the first shipment.  Charles Dimock, a member of Rotary, and Al Cahlan, also a member, cooked up a deal whereby Dimock was to supply the beer for the Rotary meeting and Cahlan would act as bartender.  The only problem was nobody knew how to open the barrel.  There wasn’t a bung starter in town and no bung to fit in the bunghole so the beer could run out.  Finally, the problem was solved.  A wooden mallet was resurrected and one of the speakeasies found a long unused bung, and the party was on.  That party almost destroyed the Rotary Club, because such community leaders as those in Rotary were considered above any mundanely act as a beer bust.  But the furor blew over before too much damage could be done.

The first project of the Las Vegas Rotary came only a few years after the club was formed.  Word was received from Overton that a youth there had been run over by a mower and both of his feet had been severed.  Emergency action saved the boy’s life, but it appeared that he would be unable to walk for the rest of his life.  The boy was four years old at the time.  Through services donated by the numerous doctors in the club and donations of cash from the members, the boy was sent to Los Angeles, where artificial limbs were fitted.  As the child grew and the new limbs had to be supplied, Rotary members continued to care for the youth until he was grown.

Some time later, it was determined that Notre Dame football team might stop off in Las Vegas on its way to Los Angeles for a game with U.S.C., if a proper practice field could be supplied.  So the Rotary Club, along with several other organizations, contributed to install turf on Butcher Field, which up to that time, was only a dirt field.  Notre Dame didn’t stop here for practice, but several other college teams did as they traveled to L.A. for football games.  Later, it was determined that lights would be needed for night football at the high school, so the Rotary Club donated the money to install the lights.  The lights stand there today as the result of the Rotary investment.

During the first decade of its existence, the Rotary Club had nine presidents.  Les Saunders left for Los Angeles shortly after taking office, and Bill Ferron, who served in 1923 and 1924, replaced him.  Then A.A. Hinman succeeded him, and Frosty Mildren, a doctor who had a clinic on South Second Street, across the street from the courthouse, took over.  He was succeeded in turn by Fred Hesse, long-time Mayor of the city, who in turn gave up the gavel in 1928 to Dr. F.M. Ferguson, an M.D. who had recently arrived in Las Vegas. 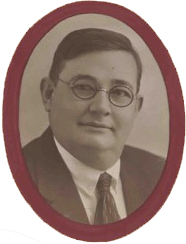 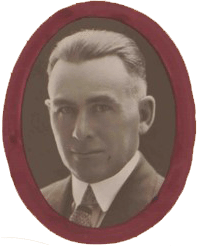 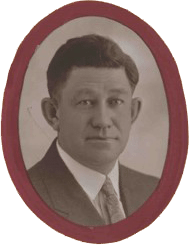 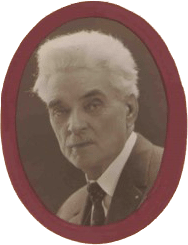