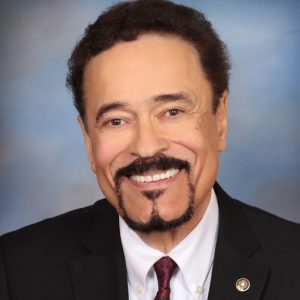 Attracted to the idea of a career in service to others, Lu decided on the field of education and pursued graduate work to earn his teaching credential. He then taught at intermediate and high schools in Colorado before moving to California where he continued his career in school administration and academia. Always involved in the community and with a personal commitment to help others, Lu served as a reader for the blind, a Regional Program Evaluator for the United Fund and Chair of the Community Holiday Basket Program, which he brought to the Rotary Club as a partnership.

Lu joined Rotary in 1983 and has been actively involved at the Club and District level ever since. He served as President of the Rowland Heights Club in 1990-91 followed by a term as Governor’s Representative. Lu became a member of the Rotary Club of Walnut Valley in 1996 and served as President three times. He has also been Assistant Governor. District Club Service Chair, District Trainer, Foundation Mentor, 4-Way Speech Contest Chair, Rotaract Chair, and has served on the Ambassadorial Scholarship and Peace Conference Committees. A multiple Paul Harris Fellow, Lu enjoys Rotary travel and hands on service. In addition to continuous local community service activities, he has served on a Rotoplast Team to Guatemala in and distributed wheelchairs in Hermosillo and Guaymas Mexico.

Lu and his sweetheart Hazel have been married for 36 years and have three sons and two grandsons. They are committed to Rotary and look forward to the many opportunities that will be presented through Rotary to serve humanity.