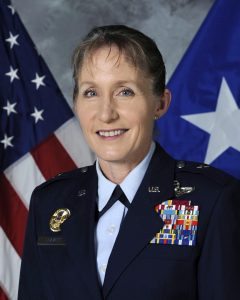 General Leavitt entered the Air Force in 1992 after earning her bachelor’s degree in aerospace engineering from the University of Texas and her master’s degree in aeronautics and astronautics from Stanford University. She earned her commission as a distinguished graduate of the Air Force Reserve Officer Training Corps program. General Leavitt has served in a variety of flying, staff and command assignments and has commanded at the flight, squadron and wing level. She is a graduate and former instructor of the U.S. Air Force Weapons School and is a command pilot with more than 3,000 hours. Her operational experiences include Operations SOUTHERN WATCH, NORTHERN WATCH, IRAQI FREEDOM and ENDURING FREEDOM. Prior to her current assignment she served as the Principal Military Assistant to the Secretary of Defense, Washington D.C.