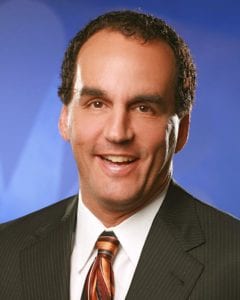 Kevin is both a Children’s author and an award-winning Meteorologist. In June 2017, Kevin received his sixth Emmy award from the Southwest Region of the National Association of Television Arts and Sciences. It was his 14th nomination for his on-air work. He has won a “Best Weathercast” award from the Associated Press, “Best On-Air Personality” and seven “Best Weathercaster” awards from Las Vegas’ Electronic Media Awards, plus several mentions in the Review Journal’s “Best of Las Vegas” annual edition.

In May 2007, his children’s book, “Deputy Dorkface; How Stinkville Got Cleaned Up” was first published. The book is based on a bedtime story Kevin told his children about a town where nobody takes a bath. The series now includes many award-winning books and “The Deputy Dorkface series” has been named among the best in family-friendly media,” …from Mom’s Choice Awards.

Each year, Kevin, visits nearly 100 schools sharing his stories, the importance of reading, and taking the students on an interactive journey through the publishing process. On the weather side, Kevin has been responsible for building the Neighborhood Weather Network, which placed weather stations, cameras and provided curriculum in meteorology in over 100 schools throughout the region.

An avid tennis enthusiast, Kevin is often found on local courts. And… to add a little excitement, looks forward to that week each Spring traveling to the Plains to chase tornadoes. Kevin is married to Terri, who is the CEO for the Grant a Gift Autism Foundation, and has a daughter, Taylor, and son, Colin. Kevin Janison is a native of Los Angeles where he attended Fairfax High School, then California State University, Northridge.