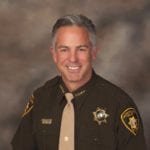 Sheriff Joseph Lombardo began his law enforcement career in 1988 as a police officer with the Las Vegas Metropolitan Police Department.

After 26 years on the force, Lombardo retired as a commissioned officer and was elected in 2014 as Sheriff of Clark County. In 2006, he completed his Masters of Science from the University of Nevada, Las Vegas, NV, as well as completing the 227th Session of the FBI National Academy. He is a 2013 graduate of the Major Cities Chiefs Association (MCCA) Police Executive Leadership Development Program.

He currently serves as Board Member on three non-profit organizations, the Nevada Child Seekers, Make-A-Wish Foundation and After-School- All-Stars.