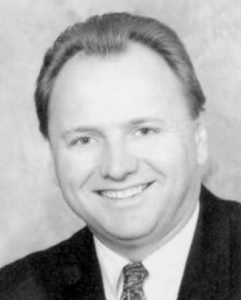 Jim Hunt took over as President for the “Mankind Is Our Business” 2001-2002 Rotary Year, and both new and veteran members certainly took the responsibility of providing “Service Above Self” as very serious “business”.  More than $124,000 was raised and distributed through Club and Rotary International Programs. Members had 115 opportunities to participate in hands-on projects, meetings, and fellowship gatherings that made 2001-2002 one of the most active years in our Club’s history.

Highlights included the success of the “100 Wheelchairs For 100 Southern Nevadan’s” Program. The event was made possible by a benefit performance of the “Honky Tonk Angels” at the Gold Coast Hotel and Casino that featured Jim’s wife Lori Hunt (a.k.a. Lori Legacy) who is one of the stars of the show. The sold-out performance raised more than $28,000 that enabled the Club to purchase and distribute 120 wheelchairs to those who could not afford one, but also allowed the club to donate $10,000 to the Las Vegas Rotary Foundation, Inc.

Other significant achievements included serving more than 100 needy children through the “Operation Santa Clothes” program that was once again spearheaded by Bob McBrien.  Steve Linder organized two Habitat for Humanity home building projects, as well as the “Safe Streets” & “Magical Forest” events that took place at Opportunity Village.  He also oversaw the program that made it possible for literally hundreds of local needy children to attend UNLV football and basketball games while being chaperoned by Club members.

Another moment that will be forever remembered is how Club members responded to the tragedy of September 11, 2001 in true Rotary fashion. Within 48 hours of the attacks, a motion from the floor was made, seconded and passed that turned the weekly drawing prize, which was at a record high of nearly $8,000, into $10,000. The funds were then sent to the New York Rotary Foundation to aid the families of the men and women of the police and fire departments who heroically gave their lives to save others.

The Club also enjoyed record attendance at many of the fellowship activities through the efforts of Steve Casey and many others.  Rotarians traveled to Cedar City, Utah for a play at the Shakespeare Festival and enjoyed food and fellowship at a UNLV tailgate party organized by Don Aikin. There were warm and friendly gatherings like the barbecue at the Mt. Charleston home of Bob Werner, a Brian Head ski trip reception hosted by Annee Nounna and a Calico Basin hike and brunch hosted by Janette Ford. Great times were also had by all at a golf tournament organized by Dr. Bill Stephan at the Wolf Creek Golf Club in Mesquite and at the annual Angel Park Putting Tournament chaired by Jim Tucker.  Janet Linder suggested and organized a new tradition of 25 Club Members by annually showing the Club’s appreciation to our weekly waiters and waitresses by putting on their aprons and skirts to “Serve The Servers” and others.

Two people received special individual recognition at the end of the year.  Carl Brunson served as co-chair of the Program Committee and either initiated or participated in so many of the Club’s fellowship, vocational and service events that he was presented the “Service Above Self” Award for 2001-2002.  And, Susan Ziobro was made an Honorary Rotarian for her outstanding efforts and going far above and beyond the call of duty as Executive Secretary.

Nominated by Lamar Marchese, the Club received the prestigious “Outstanding Service Organization of the Year Award” from the National Association of Fundraising Professionals for 2001. Recognition awards of appreciation were also received from the Boys and Girls Clubs, Child Haven and the Nevada Partnership for Homeless Youth.  Also at District Conference, the Club received the “Outstanding Service Award” for 2001-2002.

In storybook ending fashion, the year was capped with a $15,000 donation to the Las Vegas Rotary Foundation’s “Permanent Fund” and a debunking party that followed the “Wizard of Oz” theme.  Past President Tom Krob did a great job of organizing the event, which featured incredible costume and make-up work performed on Kenny Burt as the Cowardly Lion, Randy Donald as the Tin Man, and Russ Swain as the Scarecrow.  “There’s No Place Like Home” and there’s no place like the home of the Rotary Club of Las Vegas, Nevada.