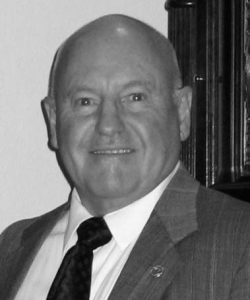 Jim Tucker took over the helm as President under the Rotary International 2002-2003 theme “Sow the Seeds of Love”.  His objective was to carry on the great work of our previous club presidents by maintaining the level of community grants, hands on projects and fellowship events, while still aggressively supporting Rotary International permanent and annual programs funds in a year of economic downturn from the effects of September 11th, 2001.

Jim developed a Christmas Reverse Raffle fundraiser and with the help of Jim Hunt, Bert Blevins and Patty Monczewski the club raised $29,200 at our Annual Christmas party.  Ed Lepere was the grand prize winner of $10,000 and he generously contributed $5,000 back to the Las Vegas Rotary Foundation.  This combined with reinstating the Super Bowl Board our club raised $15,447 towards its $36,000 three year Polio Plus Commitment.

One of Jim’s additional goals in his year of presidency was to update our Club Banner, improve the structure of our club database and digitize the club roster.  With the help of Janette Ford and her graphic designer the Club Banner and Roster cover were updated.  He also developed our LVRF, Inc.  “Two Ways of Giving” brochure.

Departed Rotarian Scotty Wetzel, who for his dedication to Rotary and acting as our liaison to Nellis Air Force Base, the “Wetzel” Award was established in his memory.  This award recognizes outstanding airman from Nellis Air Force Base and their families each quarter.

Bob McBriens “Santa Clothes” program was an enormous success. Jim Hunt continued to find people who needed his wheelchairs.       Jim & Maude Sullivan concluded their 42 years of ministry with the Salvation Army.  Jim Joined our club in 1984.

Jim Tucker’s Debunking party featured a Scuba Diving theme and was organized by past president Jim Hunt who had fellow members decked out in wet suits, snorkels and fins.  Foundation money was raised for the opportunity of  landing Jim in a dunking tank with a bullseye baseball pitch.  No better way to wrap up Scuba Divin’ Jim’s year end.