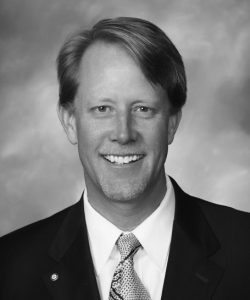 Russell Swain served as the 85th President for the Las Vegas Rotary Club during the 2008-09 Rotary year. Our International theme for the year was “Make Dreams Real” and our club was able to accomplishment many great things despite extremely difficult economic times. Our membership shined during these tough times and followed the “Service Above Self” motto to make this year memorable. President Russ brought back the “Head Table” at the weekly luncheon, and awarded the “Make Dreams Real” Four Way Test Coin to a deserving member each week for their hard work and efforts on behalf of the club.

Our annual food drive and joint meeting with the local Kiwanis Club was another big success during our year, with our club, after many years of falling short, showed up in a big way, collecting 101,006 cans vs. the Kiwanis effort of 24,624. The big winner was the local Salvation Army who was able to stock their shelves and provide for many during the holiday season. Craig Miller promised a victory early in the year, and made good with his word.

Pat Carlton helped oversee and promote our effort to increase our Paul Harris Fellowship within our club, and he did an outstanding job. We had 55 New PHF’s during the year, with over $80,000 in member donations. We also blessed with 47 multiple Paul Harris Fellowships, 13 Paul Harris Society members and 3 new major donors. Our total contributions from the Las Vegas Rotary Club to RI have now exceeded $1,111,358.

The Bill & Melinda Gates Foundation increased their donation to Rotary in support of the Polio Plus campaign to a total of $355,000,000. And RI must match that with a $200,000,000 from our membership. This challenge to our membership to raise the additional funds needed for the eradication effort brings the total goal to $555,000,000. Our club, in an effort to support the cause, had the Polo’s for Polio with the help of Gloria Gorlin, and also had the Polio Pig nicknamed “The Swyner” to help raise additional funds.

Several new projects helped us enormously were the Ladies Luncheon & later Men’s Luncheon hosted by Annee Nounna, great food, fun and fundraiser for the club. Also, we held our First Annual Rotary Texas Hold’em Poker Tournament, put on by Doug Dalton & Randy Donald and a lot of fun was had by all. Don Loyd was the big winner.

Our club received Three Outstanding Awards from District 5300, and several Exemplary Awards and a Presidential Citation from RI. Our Club Awarded long time member Dr. Kazem Fathie with an Honorary Recognition for his many years of unselfish giving to the Las Vegas Rotary Club and Foundation.