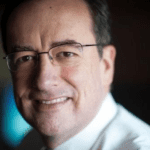 Brian Burton relocated from Dallas to Las Vegas in April of 2011 to become President and CEO of Three Square Food Bank. Since his arrival, Brian has helped Three Square develop into one of the fastest growing food banks in the nation. With his strong leadership and passionate vision for a hunger-free community, Southern Nevada’s only food bank has established itself as a trailblazer in the field of food sourcing and distribution.

In 2016, Three Square distributed more than 40 million pounds of food and grocery product, the equivalent of more than 33 million meals. Three Square works with a service network of nearly 1,300 community partners including non-profit and faith-based organizations, schools, government agencies and businesses, which help the organization serve more than 137,000 individuals monthly.

Three Square, which has been in operation since 2007, is a member of the Feeding America network, the nation’s largest domestic hunger-relief organization, working to connect people with food and end hunger.

Brian’s career began as a controller for Centex Homes but quickly evolved into humanitarian work after serving as an associate pastor at a Baptist church in Dallas, Texas. He then served for 14 years as Executive Director of the Wilkinson Center, a faith-based nonprofit organization lifting people out of poverty through education and emergency services. Brian is a current member and past chair of the Greater Las Vegas Nonprofit CEO Council, where he collaborates with leaders from the major social service providers in the community.

Brian is a native of Little Rock, Ark., and holds an MBA degree from Louisiana State University and a Master of Divinity from Southern Seminary in Louisville, Ky. When Brian is not working, he enjoys writing, reading, bird-watching, traveling, and hiking up Mt. Charleston with his basset hound.