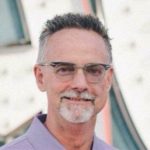 Rob McCoy has been the President & CEO of the Neon Museum since May 2016.

McCoy began his career as a television news reporter and anchor.  He joined the corporate world in 1983 and in the intervening years has provided valuable expertise to several companies in the areas of public, media and government relations as well as crisis communications and marketing.  McCoy took his position at the Museum following an 18-year career at CenturyLink where he was associate vice president of government affairs and community development.

As a native Las Vegan, issues concerning quality of life and sustainability drive McCoy’s community commitments, both professionally and personally.  In addition to chairing the Neon Museum’s Board of Trustees for two years and serving as a board member for seven years prior, he most recently served on the boards of The Boys & Girls Clubs of Southern Nevada, Metro Chamber of Commerce and the Nevada Taxpayers Association.