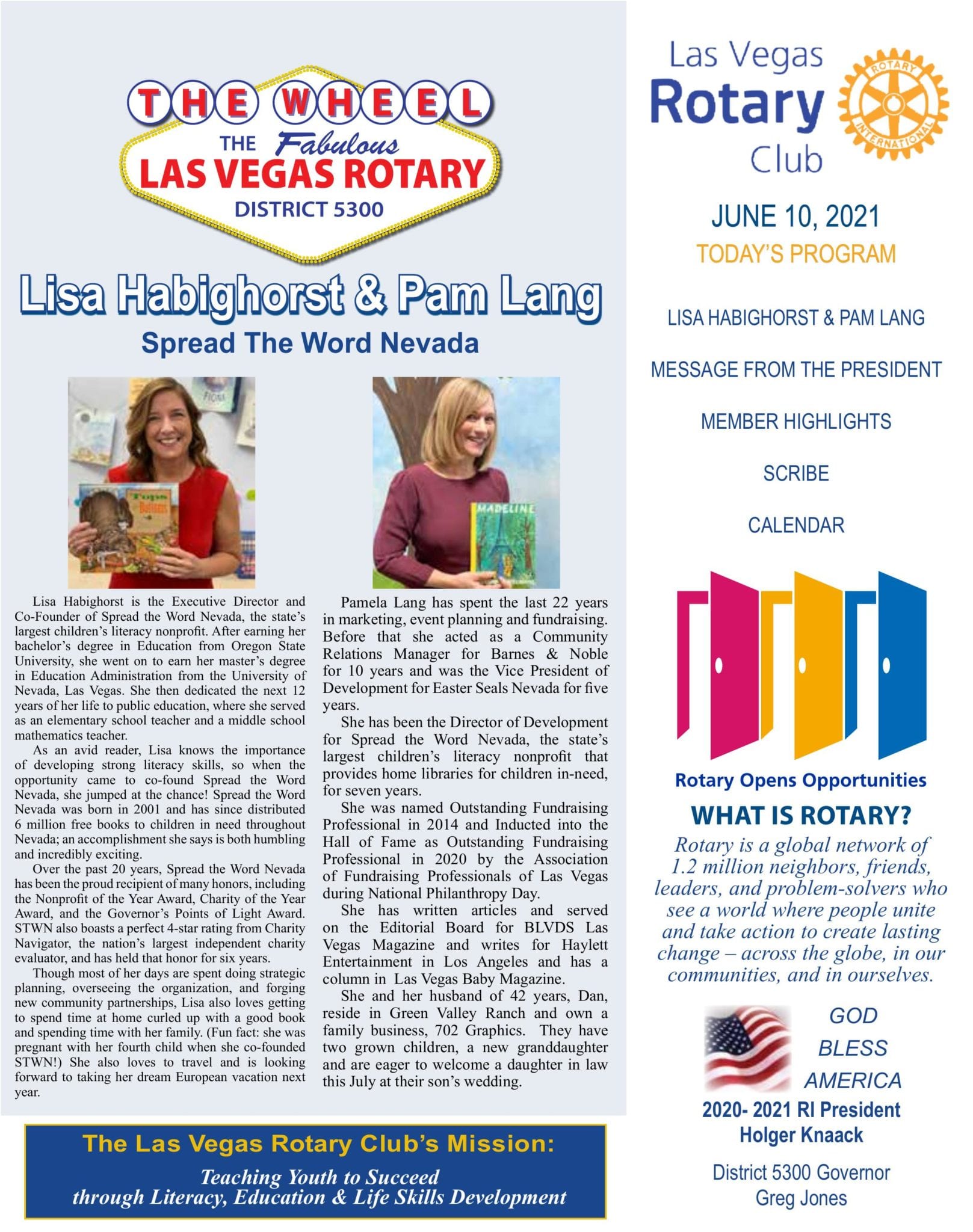 Lisa Habighorst is the Executive Director and Co-Founder of Spread the Word Nevada, the state’s largest children’s literacy nonprofi t. After earning her bachelor’s degree in Education from Oregon State University, she went on to earn her master’s degree in Education Administration from the University of Nevada, Las Vegas. She then dedicated the next 12 years of her life to public education, where she served as an elementary school teacher and a middle school mathematics teacher.

As an avid reader, Lisa knows the importance of developing strong literacy skills, so when the opportunity came to co-found Spread the Word Nevada, she jumped at the chance! Spread the Word Nevada was born in 2001 and has since distributed 6 million free books to children in need throughout Nevada; an accomplishment she says is both humbling and incredibly exciting.

Over the past 20 years, Spread the Word Nevada has been the proud recipient of many honors, including the Nonprofit of the Year Award, Charity of the Year Award, and the Governor’s Points of Light Award. STWN also boasts a perfect 4-star rating from Charity Navigator, the nation’s largest independent charity evaluator, and has held that honor for six years.

Though most of her days are spent doing strategic planning, overseeing the organization, and forging new community partnerships, Lisa also loves getting to spend time at home curled up with a good book and spending time with her family.(Fun fact: she was pregnant with her fourth child when she co-founded STWN!) She also loves to travel and is looking forward to taking her dream European vacation next year.

Pamela Lang has spent the last 22 years in marketing, event planning and fundraising. Before that she acted as a Community
Relations Manager for Barnes & Noble for 10 years and was the Vice President of Development for Easter Seals Nevada for five years.

She has been the Director of Development for Spread the Word Nevada, the state’s largest children’s literacy nonprofi t that provides home libraries for children in-need, for seven years.

She has written articles and served on the Editorial Board for BLVDS Las Vegas Magazine and writes for Haylett Entertainment in Los Angeles and has a column in Las Vegas Baby Magazine.

She and her husband of 42 years, Dan, reside in Green Valley Ranch and own a family business, 702 Graphics. They have two grown children, a new granddaughter and are eager to welcome a daughter in law this July at their son’s wedding.

Where Did a Year Go?

One of the many great things about Rotary is that there are over a hundred years of experience and experienced leaders that a new group of individual club leaders can look to for help and direction. One of the best suggestions that I received as a president elect was to identify in detail my vision for what our club would accomplish during the year that I would be privileged to serve as club president. So, I did, but then the world, including RI, hit the pandemic brakes.

For my predecessor, Jackie Thornhill, who was well along in achieving her vision for the Rotary program year during which she served as Club President, that pandemic disruption was probably like a nasty gut punch. For me, (once the shock wore off) it introduced uncertainty as to how RI and our club would have to adapt. It produced a year of constantly writing a new playbook within the general outlines of the time honored Rotary order. That turned out to be less difficult than I first imagined, thanks in large part to the leadership of our RI President, Holger Knaack , and our District Governor, Greg Jones.

The main reason that this past Rotary program year flew by, however, was that as quickly as the pandemic knocked us down, we jumped back up and went right back to doing as much as we could during the “new normal”. We accomplished a lot this past year, and I am certain that we are all excited to see our incoming Club President, Mike Ballard, roll out his vision for what we will accomplish in the coming program year. 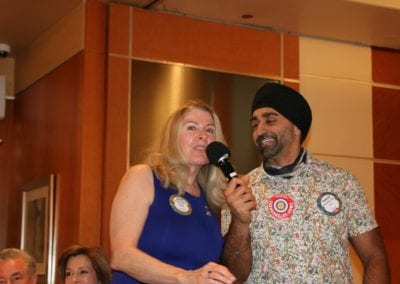 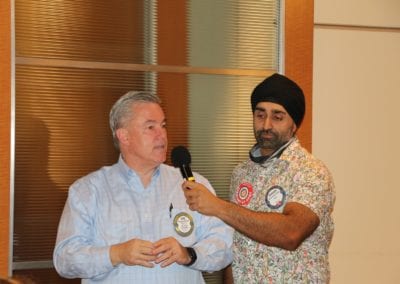 PE Mike Ballard reminds members to complete and turn in their pledge forms. 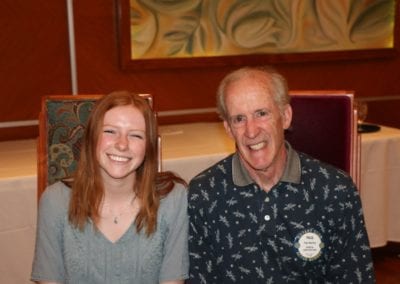 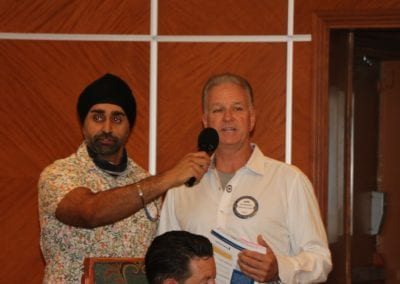 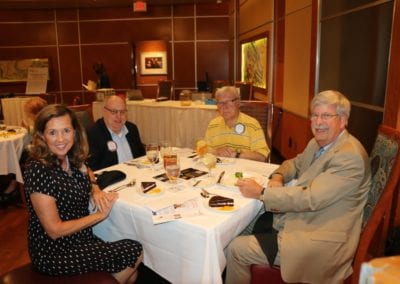 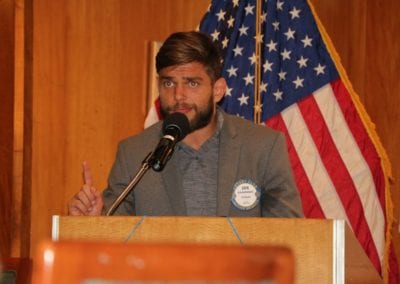 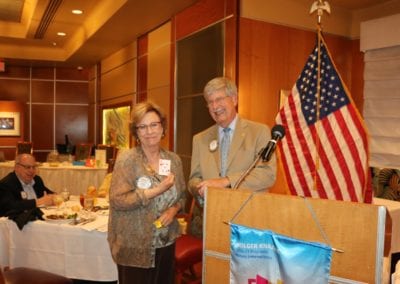 Carolyn Sparks tries for the joker. 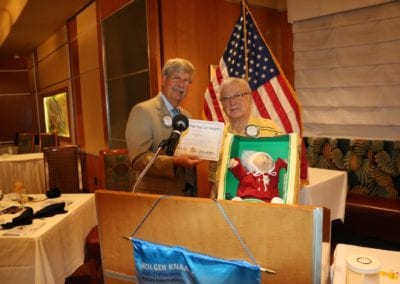 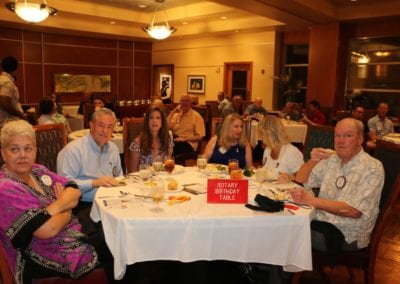 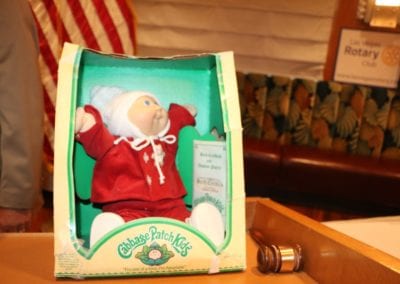 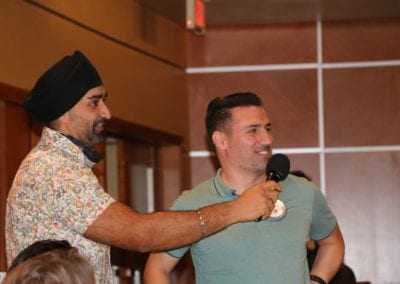 Adrick ‘Rick’ Akoopie being fined for missing the birthday table. 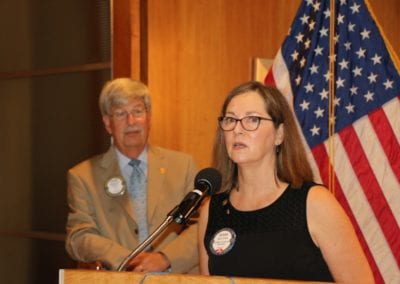