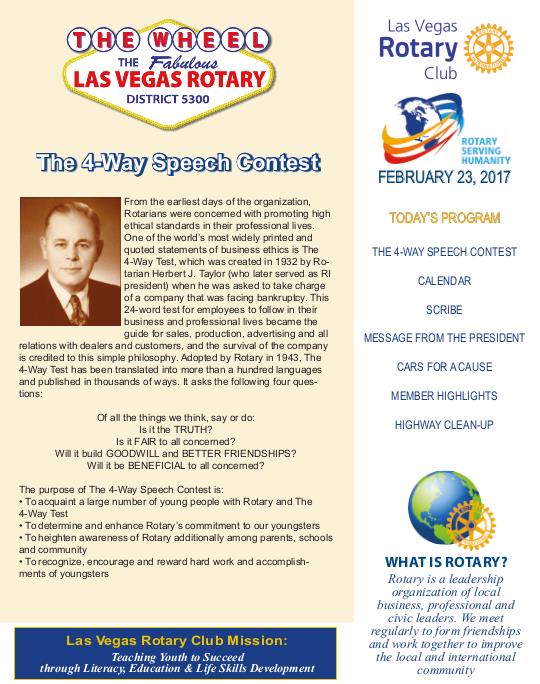 From the earliest days of the organization, Rotarians were concerned with promoting high ethical standards in their professional lives.
One of the world’s most widely printed and quoted statements of business ethics is The 4-Way Test, which was created in 1932 by Rotarian Herbert J. Taylor (who later served as RI president) when he was asked to take charge of a company that was facing bankruptcy. This 24-word test for employees to follow in their business and professional lives became the guide for sales, production, advertising and all relations with dealers and customers, and the survival of the company is credited to this simple philosophy. Adopted by Rotary in 1943, The 4-Way Test has been translated into more than a hundred languages and published in thousands of ways. It asks the following four questions:

The purpose of The 4-Way Speech Contest is:
• To acquaint a large number of young people with Rotary and The 4-Way Test
• To determine and enhance Rotary’s commitment to our youngsters
• To heighten awareness of Rotary additionally among parents, schools and community
• To recognize, encourage and reward hard work and accomplishments of youngsters

Given our program today, I found a few interesting quotes by Confucius related to the concept of truth. But before I provide these, a bit of erudition on Confucius himself. Confucius was born in 551 BC and died in 479 BC. It is believed that he held several government jobs during his early 20s and also worked as a bookkeeper and caretaker of sheep and horses (two skills which naturally go together). The philosophy he developed emphasized personal and governmental morality, the correctness of social relationships and justice and sincerity – sounds suspiciously like he could have been a Rotarian to me!
In any event, he had a few thoughts on the truth that I thought were insightful:

Please delight in today’s program as these wonderful young men and women talk about the truth, and the other elements of our magnificent
Four Way Test.