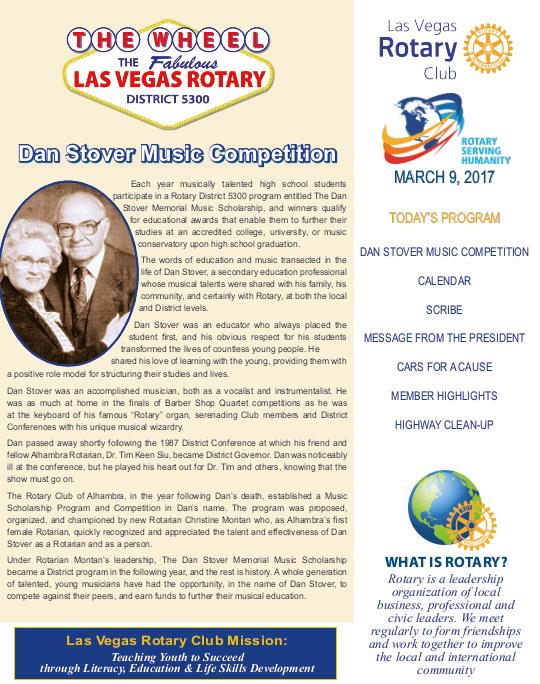 Each year musically talented high school students participate in a Rotary District 5300 program entitled The Dan Stover Memorial Music Scholarship, and winners qualify for educational awards that enable them to further their studies at an accredited college, university, or music conservatory upon high school graduation.The words of education and music transected in the life of Dan Stover, a secondary education professional whose musical talents were shared with his family, his community, and certainly with Rotary, at both the local and District levels.
Dan Stover was an educator who always placed the student first, and his obvious respect for his students transformed the lives of countless young people. He shared his love of learning with the young, providing them with positive role model for structuring their studies and lives.
Dan Stover was an accomplished musician, both as a vocalist and instrumentalist. He was as much at home in the finals of Barber Shop Quartet competitions as he was at the keyboard of his famous “Rotary” organ, serenading Club members and District Conferences with his unique musical wizardry.
Dan passed away shortly following the 1987 District Conference at which his friend and fellow Alhambra Rotarian, Dr. Tim Keen Siu, became District Governor. Dan was noticeably ill at the conference, but he played his heart out for Dr. Tim and others, knowing that the show must go on.
The Rotary Club of Alhambra, in the year following Dan’s death, established a Music Scholarship Program and Competition in Dan’s name. The program was proposed, organized, and championed by new Rotarian Christine Montan who, as Alhambra’s first female Rotarian, quickly recognized and appreciated the talent and effectiveness of Dan Stover as a Rotarian and as a person.
Under Rotarian Montan’s leadership, The Dan Stover Memorial Music Scholarship became a District program in the following year, and the rest is history. A whole generation of talented, young musicians have had the opportunity, in the name of Dan Stover, to compete against their peers, and earn funds to further their musical education.

Dear Rotarians,
The Dan Stover Music Competition is always one of my favorite programs each year. To see the talent and dedication of these young men and women really gives one confidence in our future!
And although not a music program, I also want to give a big shout out to Bob Fisher for his continuing support of our club through his Sunday radio show. In celebration of both, I thought I would provide another lyrical quiz. See if you can guess the title and songwriter/performer:

Off on your way, hit the open road
There is magic at your fingers
For the spirit ever lingers
Undemanding contact in your happy solitude