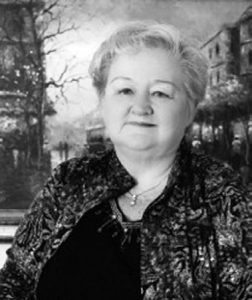 Sharon McNair began serving as the 89th President of the Las Vegas Rotary Club on July 1, 2011, but was given several opportunities to “fill in” for absentee Tom Axtell during his term. Tom decided to skip his last meeting on June 23, 2011, and allow Sharon to “practice” for her term- after all, Practice Makes Perfect! As appropriate, Sharon appeared at the podium wearing a mask of Tom Axtell just in case the members wanted to see him one last time!

THE 2011-12 BOARD OF DIRECTORS AND THEIR AREAS OF RESPONSIBILITY:

President Sharon wanted to “do something different this year” for both the Las Vegas Rotary Foundation and the Ronald McDonald House of Las Vegas. Under the chairmanship of Deb Granda, with the assistance of 32 of the club members, the FIRST Annual Valentine’s Day Gala was held at the Renaissance Hotel on Feb. 11, 2012, netting approximately $20,000 which was donated to the Las Vegas Rotary Foundation (including $5,000 to the Ronald McDonald House of Las Vegas}. The honoree of the evening for her outstanding and pioneering spirit was Thalia Dondero, the first woman member of the Las Vegas Rotary Club and the first woman on the Clark County Commission. After more than a year of planning, the event was a huge success with over 230 people in attendance, a fabulous silent and live auction and a lineup of celebrity entertainment, all performing at no cost to the club.

On May 18, 2012, the 10th Annual Charity Golf Tournament was held at the Badlands Golf Club in Memory of long-time member J.A. Tiberti and honoring Past President Tom Krob for his outstanding service to our Club and Rotary. The Chair of this event was David Young who along with his committee devised an evening with “something for everyone whether golfer or not”. The funds raised (approximately $12,000) were for the local Las Vegas Rotary Foundation to continue the charitable work done in the local community.

Other Fund-Raising activities included the Holiday Auction chaired by Carolyn Sparks, the Super Bowl Board supervised by the 25 Club members, and two Cigar Fellowships chaired by Past President Jim Hunt. One of the Cigar Fellowships was hosted by the Family of Rotary (chaired by Past President Karen Whisenhunt} on St. Patty’s Day at the home of Tom and Jayne Krob, and featured every possible type of Irish food imaginable. Proceeds from the events went to the Las Vegas Rotary Foundation to be spent for local charitable endeavors.

The first fellowship of the year was the Alpine Picnic held at Bob & Deanna Werner’s home at Mt. Charleston in July 2011, and just because they love us so much, were hosts at the second picnic at theirhome on June 9, 2012. Everyone enjoyed the fellowship, and as usual, left with full tummies!

Next, James arranged with UNLV to obtain a group of football tickets and set up a UNLV tailgate party before the game on October 29,2011. Members and guests enjoyed the hot dogs and hamburgers and then all dispersed to the football game to cheer on UNLV!

One of the most fun activities of the year was the Holiday Party which was held on December 8, 2012, at the M Hotel/Casino. Chair of this event was Melanie Muldowney who arranged a spectacular event with scrumptious food, a visit from Jolly St. Nick (Bob Patten) and some of his helpers (Kari Ayers, Pat lanuzzi, Janice Lencke, Aaron Campillo, and Major Bob Lloyd). To insure everyone got in the Holiday spirit, Bob Fisher lead the attendees in Christmas songs.

Last, but not least of the Fellowships for the year, was the year-end Debunking Party of President Sharon held on June 28, 2012, at St. John’s Greek Orthodox Church chaired by Past President Tom Axtell. This party proved to be a smashing success and Sharon was properly ” debunked” from office with several buckets of water! The highlight of the skit was the ballerinas (Jerry Engel, James Mullikin and Bob (“A-Cup” ) Werner) who entertained us with a dance (or it attempted to be a dance)!

As one of the last duties of her Presidency, Sharon announced that the “Rotarian of the Year” was Mary Ann Avnet for her “Service Above Self‘ for the year 2011-12.

During the year, Glenn set up several membership orientation meetings as needed, hosted by members of the Club. At the meetings, the focus was on presenting as much information as possible to acquaint the new members with the inner workings of the Club, including the 25 Club. The Orientation Manual was handed out and discussion was had regarding the Committees and their functions, the cost of the Club and the Foundation, and any questions posed by the new members was answered.

This year the Santa Clothes project, which started in 1996, was continued (chaired by Tom Krob, Jim Hunt and Randy Donald). A total of 310 underprivileged children were taken to three J.C. Penney stores in Las Vegas on December 8, 2011, and, with the assistance of Rotarians and lnteractors, were allowed to spend $200 each on clothing and shoes. After shopping, the children were taken to UNLV to interact with university athletes followed by an inspirational talk, pizza lunch and cookies. At the end of the event, each child was given a basketball or football to end the already amazing day.

Taking into account the discounts given by Penney’s, the Club actually purchased approximately $65,000 in clothing for the 310 children. Contributions included $18,000 donated by members of the Club, $15,500 from the Engelstad Family Foundation, $12,000 from other Rotary Clubs, $2,340 from other outside sources and various in-kind donations. The total number of volunteers made up of Club members, Interact Club members, family and friends was 189, but when you consider all the UNLV and J.C. Penney volunteers, the total is closer to 450 volunteers.

Again, on November 23, 2011, for the 57th year, the Club met with the Kiwanis Clubs to culminate the competition of the canned food drive which was staged to benefit Salvation Army and the homeless that they serve. This year as has been the case for several years, the Rotary Club donated more cans than Kiwanis (201,000 to 52,000), but the winners are really the families that receive the food. The Chairs for this event were Richard Reed and Melanie Muldowney.

Over eight years ago, the Wetzel Awards began after the demise of member Scotty Wetzel, a retired Air Force pilot. The awards were given to deserving Nellis Airmen to acknowledge their outstanding service. This year the number of awards was increased from 3 to five each quarter. So, this year, a total of 20 awards were presented to these dedicated servicemen. The chair of this committee was Bruce Quinn.

For numerous years, the Club has supported Bracken Elementary School, an “at risk” school, both financially and physically and was continued for this year also. However, a second elementary school was added this year, namely, Beckley Elementary, another “at risk” school. This year, in partnership with UNLV library, 100 boxes of books (over a thousand books) were donated to Beckley Elementary School and for Bracken, twenty-five books were purchased specific to the school’s emergent readers program. Chair for these projects was Dr. Kathy Mahon.

Under the district and club chairmanship of Karen Whisenhunt, the Club took the lead for two Open World, Rule of Law Programs with one delegation from the Ukraine in September 2011 and one from Russia in April2012. Due to the budget constraints of the State Department, only four Rotary Clubs in the U.S. were funded for this year and Las Vegas was one of them. The staff of Open World in DC stated that Las Vegas is THE best Open World Program in the U.S. We definitely agree with that!

On April 26, 2012, the Club once again honored the 50 Valedictorians from the local Southern Nevada area high schools (Chaired by Kathy Mahon) who enjoyed lunch and were presented a Fisher space pen as a remembrance of Southern Nevada. Superintendent of Schools, Dr. Dwight Jones, was the speaker.

Interact Clubs at both Advanced Technologies Academy (Chaired by Pat lanuzzi) and Del Sol High School (Chaired by Mark Russell) continued for this year. The membership at Advanced Technologies Academy broke all school records as their membership totaled 88 this year. A-Tech as they fondly call themselves, were very active during the year under the leadership of 19 year Advisor, Kim McNair-Styles, assisted by Maureen Doyle. The Club on a monthly basis cooked food for Ronald McDonald House, made sandwiches for the homeless, shopped with the underprivileged at Santa Clothes and assisted the Club on projects including the Valentine’s Day Gala in February 2012.

This year the International Committee under the Chairmanship of Steve Parikh participated in three international service projects, two through the matchinggrant.org site utilizing DDF and TRF and one District sponsored project.

Project 1 – The Club contributed $4,800 towards an Artesian Well Project in Saltinho, SP, Brazil. The project consisted of building an artesian well to provide water to the poor community of Saltinho. This $34,700 project will benefit the people who live in that area and have a lot of difficulties to obtain water for their needs.

Project 2 – The Club contributed $3,600 towards the Water Filtration Systems Project for eight schools in Beirut, Saida, Baalbek, and Mount-Lebanon, Lebanon. This is a $20,000 project which benefited 4800 school children.

Project 3 – The Club contributed $3,600 towards the District sponsored International project to provide wheelchairs in Mexico.

Race to End Polio- Contributions to the Club were $7,493 for Polio Plus and since December 1, 2007, the Club has contributed $39,203 towards PolioPlus and is the leader in the district for contributions.

The main project under this category was the development and submission of the awards request to District 5300 – Chair- Karen Whisenhunt.

In addition, the Club received the Changemaker Award from Rotary International for making a change in the community and the world.

Another highlight of the year was the 89th Anniversary celebration in April 2012. President Sharon wanted to acknowledge the hard work and dedication of the 88 past presidents as well as the members of the Club. So, on April12th Past District Governor Tom Novotny and President-Elect Randy Donald assisted her in presenting Certificates of Appreciation to all the Past Presidents of the Las Vegas Rotary Club. The speaker for the day was none other than Federal Judge Lloyd George who talked about the history of Las Vegas.

It was obvious to President Sharon that to choose only one member as Rotarian of the Year was an impossible task since so many people work so hard for the Club. President Sharon decided to institute the “True Colors Award” which was given quarterly during the year to 4 deserving Rotarians. The 4 chosen during the year were Gloria Gorlin, Cindy Breck, Deb Granda and Jim Tucker for all their “over the top” dedication to Service Above Self. They each received a two-night stay at a local hotel, Lawry Bucks, a True Colors shirt and a framed True Colors certificate.

Last, but not least of the Fellowships for the year, was the year-end Debunking Party of President Sharon held on June 28, 2012, at St. John’s Greek Orthodox Church chaired by Past President Tom Axtell. This party proved to be a smashing success and Sharon was properly “debunked” from office with several buckets of water and lots of confetti! The highlight of the skit was the ballerinas (Jerry Engel, James Mullikin and Bob (“A-Cup”) Werner) who entertained us with a dance (or it was supposed to be a dance)!

As one of the last duties of her Presidency, Sharon announced that the ” Rotarian of the Year” was Mary Ann Avnet for her “Service Above Self’ for the year 2011-12.