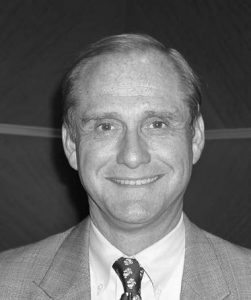 President Axtell began each meeting with a short, humorous, and occasionally obscure narrative weaving historic and cosmic events into a homily on Service Above Self and the impact of our club on local and international human need. Extended non programmatic periods for social conversation among members at the lunch tables were a part of every meeting.  Jim Tucker coordinated printing of the Roster and Wheel.  Gloria Gorlin redesigned the Wheel and provided weekly editorial leadership. Mike Ballard, Carolyn Sparks and Michael Gardineer recruited thoughtful program speakers, who were thanked with a Sole Power donation of shoes and socks for a needy child coordinated by Mary Westbrook.  Many song leaders opened the meetings, but few equaled Jerry Engel’s ambitious multipart choral rounds conducted from a ladder.

The 25 Club under the leadership of Richard Reed and James Hooban supported the social interaction goal by sponsoring an extended series of social events at resorts every third Thursday evening.  They also invited “seasoned” members to address their monthly meetings, and toured behind the scenes Rotary exhibits at the UNLV Library as the guests of Patty Iannuzzi. The Red Rock highway cleanup committee was ably led by Larry Rouse who never let a Rotarian pick up garbage without an orange vest.

David Thorson and Kari Ayers led an energized 25 Club committee committed to maintaining the club’s three year “streak” by securing more cans than the Kiwanis Club for the 55th annual Thanksgiving Canned Food Drive to benefit the Salvation Army.  They embraced the goal of broadening non-Rotarian community support by creating an online donation web site that drew national and international support, placing coin collection cans at hundreds of locations in the valley, and encouraging members to solicit their business vendors. Kris Jex arranged for a can placement in every branch of US Bank. The many efforts paid off as a record 203,237 cans were secured!  When added to the Kiwanis collections, the Salvation Army received 260,630 pounds of food for needy Las Vegans at Thanksgiving.

Not to be outdone, Jim Hunt, Tom Krob, and Randy Donald led the Santa Clothes committee to record fundraising and record participation in the Holiday shopping event at J.C. Penney stores in three malls. The committee secured a large grant from the Englestad Foundation and used online marketing to secure additional new support which, when added to member donations, allowed the clothing allowance to be increased to $200.  A record 307 needy children received clothing and shoes, an introduction to college with student athletes, plus a luncheon address by the University President, Neal Smatresk.

Mary Jane Wirges led the International Service Committee.  To increase member awareness of the club’s international involvement a large world map with our service projects and student placements was created for display at every meeting. Steve Parikh and his committee approved our participation in two RI projects that received matching funds from RI Foundation and the local Rotary Club.  A neonatal Intensive care unit was funded at P. D. Hinduja Sindhi Hospital in Bangalore, Karnataka, India. The project had a total cost of $27,103.  A second project in Shimla, Himachai Pradesh, India funded personal hygiene and clean water resources at eight schools serving 2,500 children. It involved construction of toilet facilities and sanitation systems plus water filtering and storage systems at a cost of $20,765.

Matt Christian and Karen Whisenhunt organized several days of activities for the Open World – Rule of Law event for visiting judges from Tajikistan culminating in a club dinner at the home of Bob and Deanna Werner.  Russ Swain organized transportation and housing for German youth participating in the Mayor’s Soccer Cup.  Russ and Bryan Land filled the same function for young professionals from Egypt visiting Las Vegas on the Group Study Exchange. The club funded four Rotoplast surgeries for Guatemala children with cleft lips or cleft palates. Mary Ann Avnet joined the Rotoplast mission as a non medical support specialist and gave the club a stirring report on her experience. Amanda Hurst and Michael Gordon traveled to South Africa where they donated blankets from the club to a shelter serving the homeless. With the encouragement on disaster chair Major Robert Lloyd, the club also made a special collection to provide Rotary “Shelter Box” tents and cooking supplies for the earthquake victims in Haiti.

The club was honored to secure prestigious fully funded scholarships from Rotary International for deserving Las Vegans.  Karen Whisenhunt, David Kreamer, and Caty Crockett, assisted these students through the highly competitive application process. Chantelle Doerksen, a Peace Corps alum who was working at the Las Vegas Lung Association, won a prestigious RI World Peace Fellowship. She addressed the club prior to her departure for a year’s study in Argentina. Amanda Reed, a UNLV Masters student in Geoscience, won a prized RI Ambassadorial Scholarship. She was funded for a year’s graduate study in Ghana. She spoke to the club about her development of low cost fog harvesting technology to secure water for a village in Cape Verde, West Africa. We also placed Carly Chang as an International Youth Exchange student. Her Rotary host parents were in Copenhagen, and she traveled extensively throughout Europe with them.

Glenn Meier’s Administration Committee achieved a high level of social interaction by organizing many events for fellowship and fundraising. A well attended Alpine Picnic was chaired by Deb Granda and hosted at the Mount Charleston retreat of Bob and Deanna Werner. Three Cigar Fellowships organized by Jim Hunt and Tom Krob raised significant funds for the Foundation. James Bradshaw coordinated the UNLV football tailgate. Annee Nounna hosted the Winter Ski Trip at her beautiful mountain home. Ginger Anderson led the Holiday Party committee that planned an elegant evening at the Red Rock Country Club, with a productive fund raising auction organized by Carolyn Sparks. March Madness and Super Bowl pools were organized by Craig Miller, and Glenn Meier made money for the Foundation as all participants — except Stuart Levy — lost money during a poker tournament at the new Aria Resort. Bruce Quinn chaired the annual golf tournament which not only raised funds for the club, but added financial and counseling assistance for returning veterans with traumatic brain injury or missing limbs to its philanthropic purpose.

Richard Jost’s Membership Committee brought in 19 vigorous new members. Although this represented the largest number of new members recruited by any Southern Nevada Rotary club, it was not enough to cause overall club growth.  The persistent recession crippling the Nevada economy caused 21 members to resign or seek leaves of absence.

Mary Ann Avnet chaired the Local Community Service Projects Committee.  Chris Steely and Steve Linder organized the quarterly Wetzel Awards for three Nellis service personnel selected by the commander for high achievement in military and community service. Recipients names are inscribed on a plaque at the base and all receive and an evening out with transportation, dinner, and a show funded by the club. Deb Harris arranged for the club to sponsor a night watching the 51’s baseball team for two dozen Rotarians and 200 Nellis service men and women.  Jim Hunt worked with social agencies to find needy children and adults who received donated wheelchairs from the club.  Cindy Breck recruited Rotary volunteers for the Opportunity Village Magic Forest fundraiser. Deb Granda organized holiday food service support for the Salvation Army. Sharon McNair’s grants committee reviewed grant applications and with assistance from James Kohl, made awards to the LV Rescue Mission, Boy Scouts, Spread the Word Nevada, Foundation for an Independent Tomorrow, and West Care.

Paul Maffey chaired the Las Vegas Rotary Foundation. The board selected an investment firm to formally manage the Foundation’s endowment funds and established formal investment guidelines. President Axtell recommended adoption of “best practice” nonprofit disbursement policies for the Permanent (endowment) Fund that would base charitable giving on a rolling three year average return on investment to avoid the effects of extreme swings in market valuations.  This approach was adopted by the board. The board also adopted an advanced funding policy that will allow future Presidents to have more certainty about funds available for the club’s philanthropic projects. Additional members notified the Foundation of their inclusion of a gift to the Las Vegas Rotary Foundation in their estate planning.  Michael Gordon made a Herculean effort to achieve the first ever 100% Paul Harris membership for the club. This was accomplished in May when 14 first time Paul Harris Fellowships were awarded.  The Foundation reported cumulative member donations of over $1,258,000 to the Rotary International Foundation, an equal amount in our local Foundation, and over $30,000 in cumulative gifts to the Gates Polio Plus Challenge.

At the 2011 District 5300 conference in La Jolla, the Las Vegas Rotary Club received Exemplary Awards for Membership Retention and Vocational Service, and Outstanding Club Awards for International Service and Community Service.  RI Presidential Citations for Overall Club Activities and 100% Paul Harris Membership were also received. At the conference many club members were recognized by District President Roger Schulte for service to the district: Pat Carlton for serving as Deputy District Governor; Russ Swain for district leadership on the GSE program, Michael Gordon for efforts to locate alumni of Rotary scholarships, Mary Ann Avnet for RYLA, and Steve Parikh for international projects.

President Tom’s demotion was organized by an excessively enthusiastic committee led by past President Karen Whisenhunt and held in an upscale trailer park befitting committee’s estimation of Tom’s year of service.  Having worn a “cheese head” in a club meeting after the Green Bay Packers won the super bowl, the theme and dress was farm oriented as he was prepared to go “out to pasture”. A trivia quiz pitting him against Bob Fisher dressed as an over caffeinated Elmo, and Edy Seaver dressed as a salacious Big Bird led to repeated point losses regardless of his answers and distractions from a squirt gun toting Karen Whisenhunt. In keeping with Club traditions, he was summarily deposited in the pool, after donning striped 1900’s swimming attire. When he dried off, the club presented Tom with hundreds of books he could donate to a worthy program.  Rotarian of the Year was presented to Richard Reed for his online support of many club projects and service as 25 Club President. Executive Director Shawn Noorda and Tom’s executive assistant Bernie Goodemote were thanked for their extraordinary support of the club and received flower bouquets.  Tom recalled outstanding events and leaders from the year, thanked the club and foundation boards, lauded the extraordinary dedication of club members, and happily pinned the presidents pin on Sharon McNair.