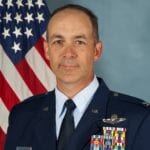 Colonel David M. Bissonnette is the Vice Commander, 432d Wing and 432d Air Expeditionary Wing (AEW), Creech Air Force Base, Nev. He is responsible for all operations and maintenance of the Air Force’s first Remotely Piloted Aircraft wing, equipped with more than 130 MQ-1B Predator, MQ-9 Reaper and RQ-170 Sentinel remotely piloted aircraft. The 432d Wing trains pilots, sensor operators, and other crewmembers, and conducts persistent attack and reconnaissance combat operations worldwide. As the 432 WG Vice Commander, he leads more than 2,500 active duty, government civilians, and contract personnel in three groups and the wing staff. In addition, as the 432 AEW Vice Commander, he assists in the execution of operational authorities for the Combined Forces and Joint Forces Air Component Commanders for 432d Wing units as well as twelve Air National Guard combat MQ-1B and MQ-9 units across the United States.

Colonel Bissonnette was commissioned in 1992 as an ROTC graduate of Princeton University. He has served in a variety of operational flying, staff and command assignments at the squadron, group, numbered air force and joint levels. He was the Deputy Commander of the 432d Operations Group, Commander of the 432d Operations Support Squadron and served as the Director of Operations of the 361st Expeditionary Reconnaissance and the 15th Reconnaissance Squadrons and a student at the National War College at Ft. McNair, Washington, D.C. Most recently, he served as the Chief of the United States Forces Korea and Combined Forces Command’s Joint Operations Coordination Element and was the primary operations liaison element within the Republic of Korea’s Joint Chiefs of Staff.