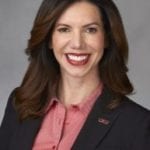 Desiree Reed-Francois has been announced as the director of athletics at UNLV, effective June 1. She will oversee all aspects of the athletics program, including general operations, fiscal affairs, facilities, strategic planning and external relations. She will also become the first Hispanic female athletics director at the FBS level.

Under her leadership, overall ticket, marketing, and licensing revenue rose by more than 20 percent the past two years and the institution secured the largest corporate development gifts in program history. This included a season ticket sellout for football and marked attendance increases in men’s and women’s basketball, baseball, soccer and softball. She was one of just four women in the nation responsible for day-to-day operations of a Power Five football program and helped orchestrate the most-attended football game in history in 2016 when Virginia Tech and Tennessee met in front of more than 156,000 fans at Bristol Motor Speedway.

Working closely with Virginia Tech athletics director Whit Babcock, Reed-Francois was instrumental in the recruitment and hiring of current Hokies head football coach Justin Fuente (the reigning ACC Coach of the Year) and coaches for women’s basketball and lacrosse – all of which recently enjoyed or are in the midst of stellar seasons. She also led the search for first-year volleyball coach Jill Lytle Wilson.

Prior to Virginia Tech, Reed-Francois spent two years at the University of Cincinnati as senior associate athletics director and senior woman administrator. There, she was a member of the executive staff whose duties included external affairs, sport oversight and negotiation of the university’s contract with the Cincinnati Bengals for use of Paul Brown Stadium during a campus stadium renovation. She also served for a period in 2014 as interim athletics director.

During her career in athletics administration, Reed-Francois has worked at the University of Tennessee, Fresno State, Santa Clara, San Jose State, the University of California-Berkeley, and the University of San Francisco. At Tennessee, she was the first female administrator in SEC history to oversee men’s basketball. Her work has covered athletics compliance, program oversight, budget management, brand development and marketing, strategic planning, major gifts cultivation, contracts and legal counsel, student-athlete services, and facilities management.

Before working in college athletics, she was a practicing lawyer and also spent time as a legal associate for the Oakland Raiders and the NFL’s Management Council.

Reed-Francois earned a bachelor’s degree from UCLA and a Juris Doctorate from the University of Arizona College of Law. She is a member of the Califonia Bar and taught law classes at Tennessee and Santa Clara.

She is heavily involved in athletics administration at the national level, participating in the Division 1 Athletics Directors Leadership Institute and Fellows Program, the Women Leaders in College Sports’ Executive Institute, and as a member of the College Football Playoff Committee’s operations committee. She has served on numerous Atlantic Coast Conference and American Athletic Conference committees. She is also a member of the National Association of Collegiate Marketing Administrators and National Association of College Directors of Athletics. In 2016, she was named one of twelve senior athletics administrators as “NEXT UP” by College AD’s panel of respected athletics directors.

Reed-Francois and her husband Joshua have a son, Jackson.