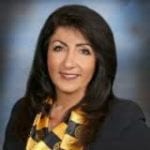 Raghada Khoury, Born in Amman Jordan, raised in Yonkers, NY and has called California home since 1977. She lived in Azusa until she moved to Apple Valley in 1987. Raghada has
a 29-year old son.

Ms. Khoury has been in Real Estate Investment for the last 13 years. Licensed by the State of California to sell insurance specifically Pre-Need while contracting with Funeral Homes in Southern California.  Raghada has served as the President of the Domestic Violence Shelter for Women and Children in the Victor Valley for over 5 years.  Appointed to the Commission on the Status of Women where she served for 6 years advocating for the safety and prosperity of all women with a focus on youth leadership. She also served on the Town of Apple Valley Parks and Rec Commission and has served as a member of the Apple Valley Chamber of Commerce Board of Directors for the past four years. In her 14-year tenure, Raghada served as a club president and as a Board of Director for the Rotary Club of Apple Valley for the past 13 years.At the District level, Raghada has served in various capacities such as AG, Exec-AG,

At the District level, Raghada has served in various capacities such as AG, Exec-AG, District Grants Chair, 4 Way Test Speech Contest Chair, Governor’s Aide 2013-2014 and on many other District Committees.