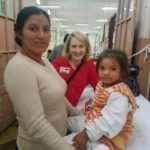 Everybody has a “thing” and Mary Ann knew immediately that Rotaplast was her thing. She has now done three missions with Rotaplast. In 2011, District 5300 sponsored their first Rotaplast mission as District Governor Roger Schulte’s international project. From the moment that she heard about the upcoming mission to Guatemala at District Assembly, Mary Ann was determined to go with them. For two weeks, she served as the Medical Records Coordinator while collecting her “Rotary Moments”.

In October of 2016, Mary Ann spent two weeks in Sylhet, Bangladesh where she was excited to fulfill the role of Recreation Therapist. This is a great job if you like playing with kids! In Sylhet, they were fortunate enough to take over a vacant room near the ward, and each day she opened the playroom to patients, their siblings, and their parents. But it was such a novelty that the doorway was often crowded with children and adults alike who just wanted to take in the fun happening in that room. It ended up not mattering if they were at the hospital because of Rotaplast. All were welcome in the playroom. By the time the Rotaplast team left Sylhet at the end of two weeks, the walls were covered with colorful pictures done by everyone who stopped in to draw, color or use markers. They did not speak the same language, but there was an abundance of understanding.

In May of 2017, District 5300 sponsored most of the mission that went to Lima, Peru and because of that, four local Rotarians, including Mary Ann, were fortunate enough to participate as non-medical volunteers Mary Ann was also the Recreation Therapist in Lima but found that it was a much different experience – different but equally wonderful! Mary Ann has been a member of the Las Vegas Rotary Club since 2006. She has served as a member of the Club Board of Directors for a total of 7 years. She was President of the 25 Club in 2007-2008 and served as President of the Club in 2015-2016. Mary Ann was the Team Leader of the Group Study Exchange month long trip to northern Chile in 2012. She chaired the following year’s incoming and outgoing GSE exchange with India, and she was honored to be the Rotarian of the Year in 2012. Her interests in Rotary have led her to be very involved with TLC and RYLA.
She served as Assistant District Governor in 2016-2017.