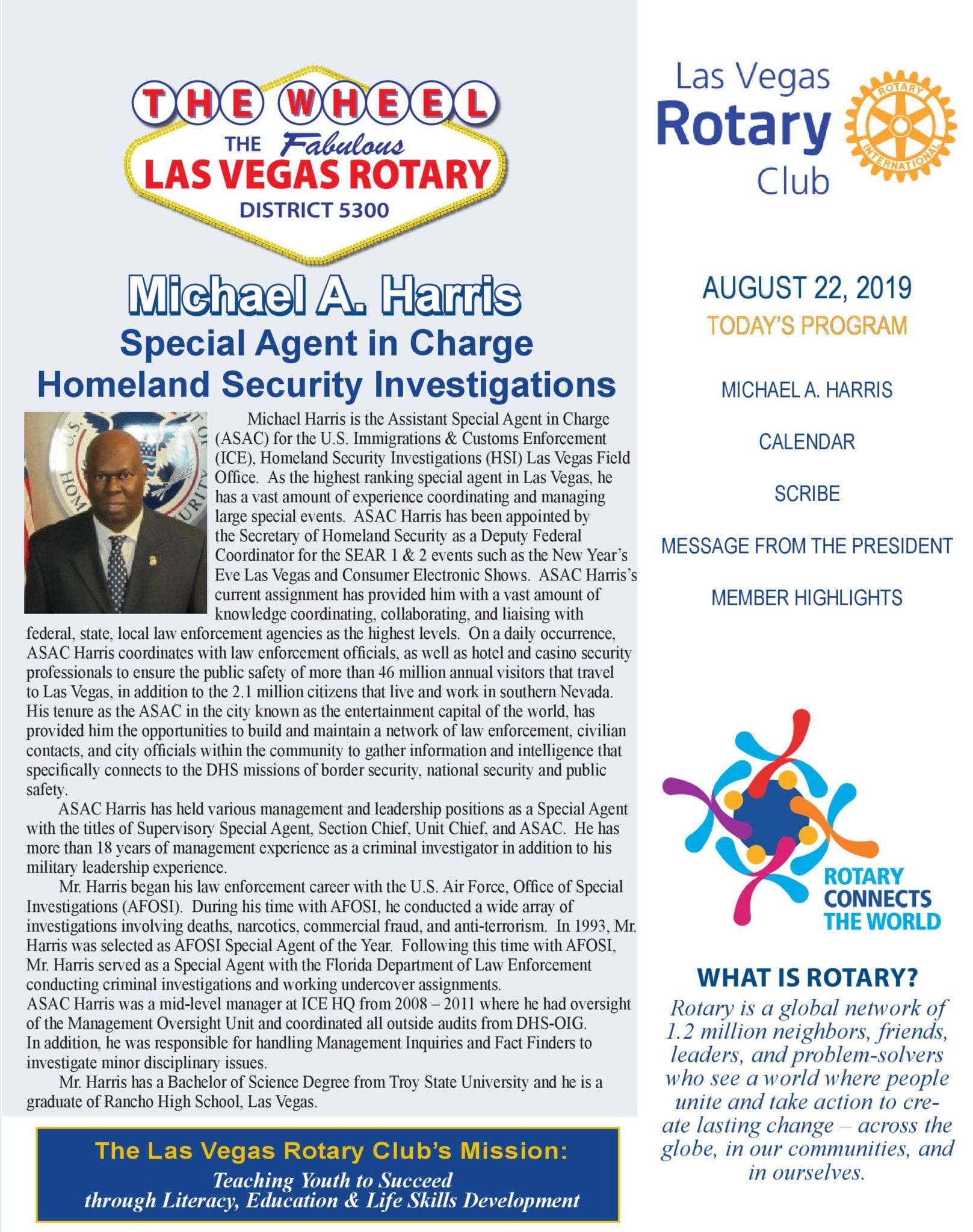 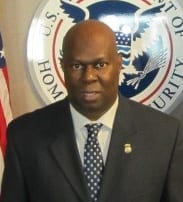 Michael Harris is the Assistant Special Agent in Charge (ASAC) for the U.S. Immigrations & Customs Enforcement (ICE), Homeland Security Investigations (HSI) Las Vegas Field Office. As the highest ranking special agent in Las Vegas, he has a vast amount of experience coordinating and managing large special events. ASAC Harris has been appointed by the Secretary of Homeland Security as a Deputy Federal Coordinator for the SEAR 1 & 2 events such as the New Year’s Eve Las Vegas and Consumer Electronic Shows. ASAC Harris’s current assignment has provided him with a vast amount of knowledge coordinating, collaborating, and liaising with federal, state, local law enforcement agencies as the highest levels. On a daily occurrence, ASAC Harris coordinates with law enforcement officials, as well as hotel and casino security professionals to ensure the public safety of more than 46 million annual visitors that travel to Las Vegas, in addition to the 2.1 million citizens that live and work in southern Nevada. His tenure as the ASAC in the city known as the entertainment capital of the world, has provided him the opportunities to build and maintain a network of law enforcement, civilian contacts, and city officials within the community to gather information and intelligence that specifically connects to the DHS missions of border security, national security and public safety.
ASAC Harris has held various management and leadership positions as a Special Agent with the titles of Supervisory Special Agent, Section Chief, Unit Chief, and ASAC. He has more than 18 years of management experience as a criminal investigator in addition to his military leadership experience.

Mr. Harris began his law enforcement career with the U.S. Air Force, Office of Special Investigations (AFOSI). During his time with AFOSI, he conducted a wide array of investigations involving deaths, narcotics, commercial fraud, and anti-terrorism. In 1993, Mr. Harris was selected as AFOSI Special Agent of the Year. Following this time with AFOSI, Mr. Harris served as a Special Agent with the Florida Department of Law Enforcement conducting criminal investigations and working undercover assignments.

ASAC Harris was a mid-level manager at ICE HQ from 2008 – 2011 where he had oversight of the Management Oversight Unit and coordinated all outside audits from DHS-OIG. In addition, he was responsible for handling Management Inquiries and Fact Finders to investigate minor disciplinary issues.

Mr. Harris has a Bachelor of Science Degree from Troy State University and he is a graduate of Rancho High School, Las Vegas.

Today we will hear about a topic that has had a lot of press lately, but what has really been done? Human trafficking is a much more prolific than we care to admit, and we are experiencing this firsthand in our Las Vegas community. There were 2,794 minors recovered from human sex trafficking by Las Vegas Metropolitan Police Department from 1994 through 2016; in 2016 according to Metro PD stats there were about 12 cases per month and 2017 had only gone up.

The profile of the children in our area and those that are most vulnerable are female 13 and younger who have been abused, subjected to family instability, live in poverty, have runaway or are already homeless. There are several warning signs to be aware of. Youths who have trouble sleeping during the night because of their soliciting, youths who run away from Friday to Sunday without any clear explanation of their whereabouts, a tattoo that may be used as branding, promiscuous dressing or dressing in expensive clothing, a change in attitude and language, referring to a boyfriend as ‘daddy’ and dating older men.

Out guest speaker today will discuss this issue on a much larger scale, from the ICE perspective. Directly from the Immigration and Customs Enforcement website, “According to the U.S. Department of State, the United States is a destination country for thousands of men, women, and children trafficked from all areas of the world. These victims are trafficked for the purposes of sexual and labor exploitation. Many of these victims are lured from their homes with false promises of well-paying jobs; instead, they are forced or coerced into prostitution, domestic servitude, farm or factory labor or other types of forced labor. The question is, is there an upward trend in trafficking nationally and internationally just as there is locally?

What is ICE doing to combat this despicable practice? ICE uses a victim-centered approach, which essentially protects victims from fear and intimidation, working with trained coordinators who collaborate with several NGO’s and short-term immigration relief.

Here locally, Metro has trained 400 social workers on the signs of commercial and sexual exploitation of children and along with the Clark County Department of Family Services are screening children for the warning signs and the actual signs of being in the life.

Again, what is being done? Because of the nature of human trafficking, data on the local, national and international levels is incomplete at best.

Here are 5 ways we can attempt to help:

The most important thing all of us can do, is recognize that there is a problem. The old saying which is now becoming the new saying: “See something, Say something.”

We owe it to our children to show we care and help not hinder agencies that are doing just that. 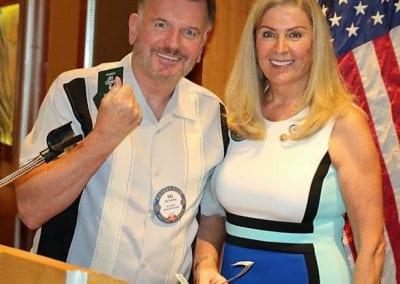 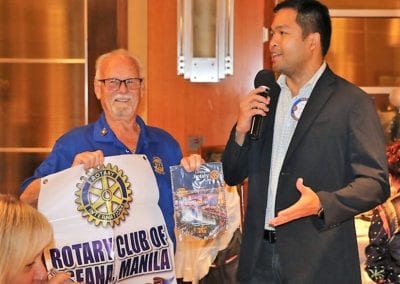 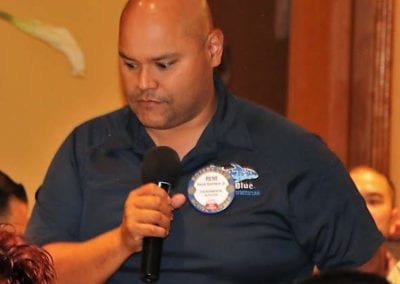 Rene Gamero announced that the canned food drive to benefit the Salvation Army is now underway. 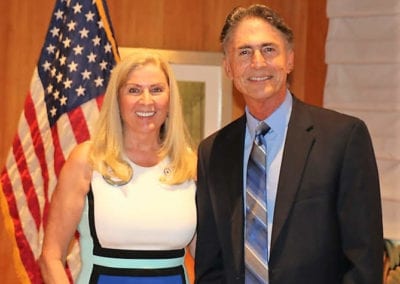 President Jackie thanked our speaker Mitch Fox for his presentation. 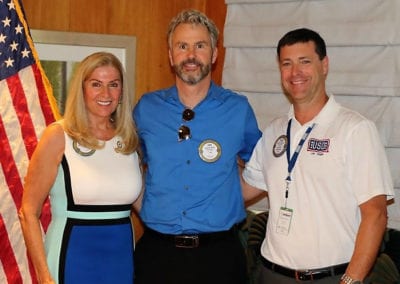 President Jackie presented a check for $1350 for the “Share What You Can” Award and PP Jim Kohl presented $5,000 from Howard & Howard and the LVRF to PP Dave Thorson for the USO. 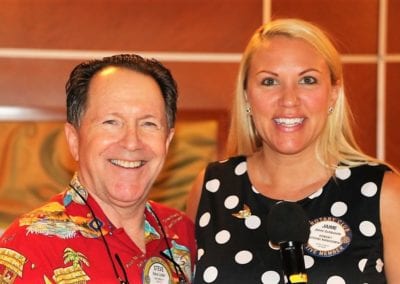 PP Steve Linder our Sergeant At Arms, posed with our SOAR Chair Jaime Goldsmith for a pause and smile photo. 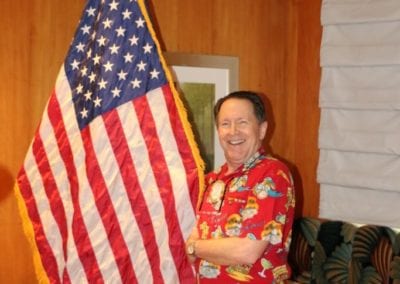 PP Steve Linder made it a point to present our flag in the proper direction. 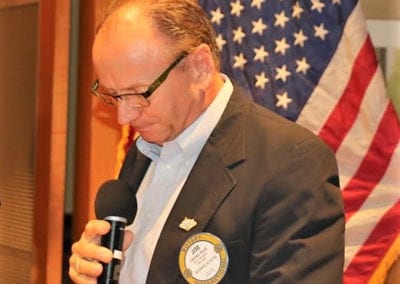 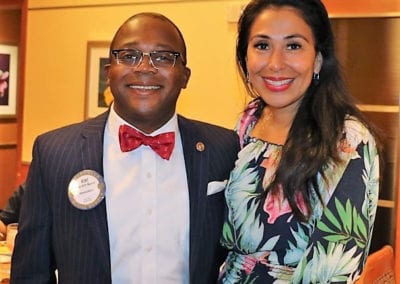 Kim Nyoni posed for a picture with his guest. 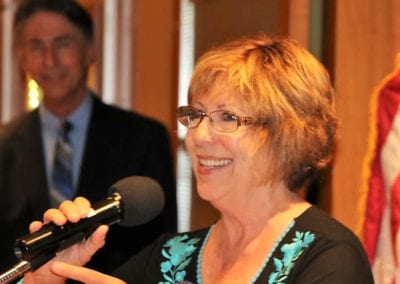 Judith Pinkerton led us in singing ”This Land is Your Land”. 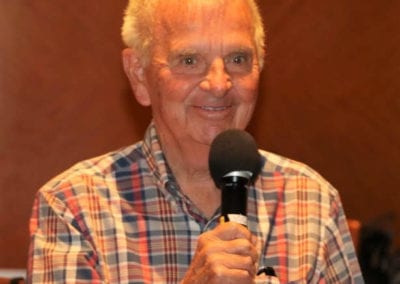 Jerry Sennes reminded of our highway cleanup and the brunch afterwards at his home. 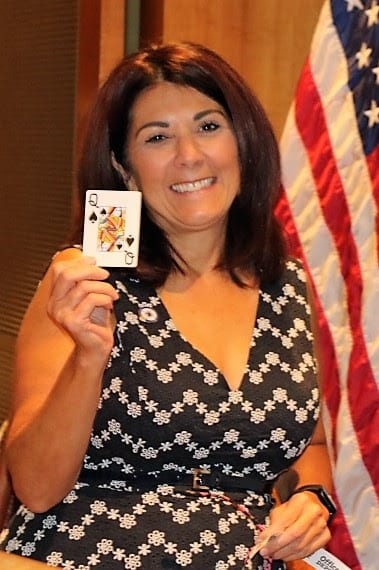 Francesca Gilbert had a chance to pull a joker…but she is a queen. 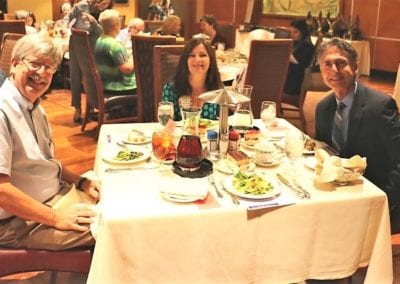 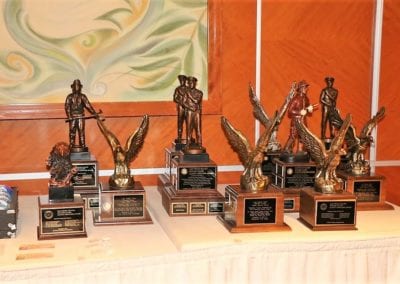 A photo of the SOAR awards to be presented to honor our First Responders; Police, firefighters and emergency personnel.