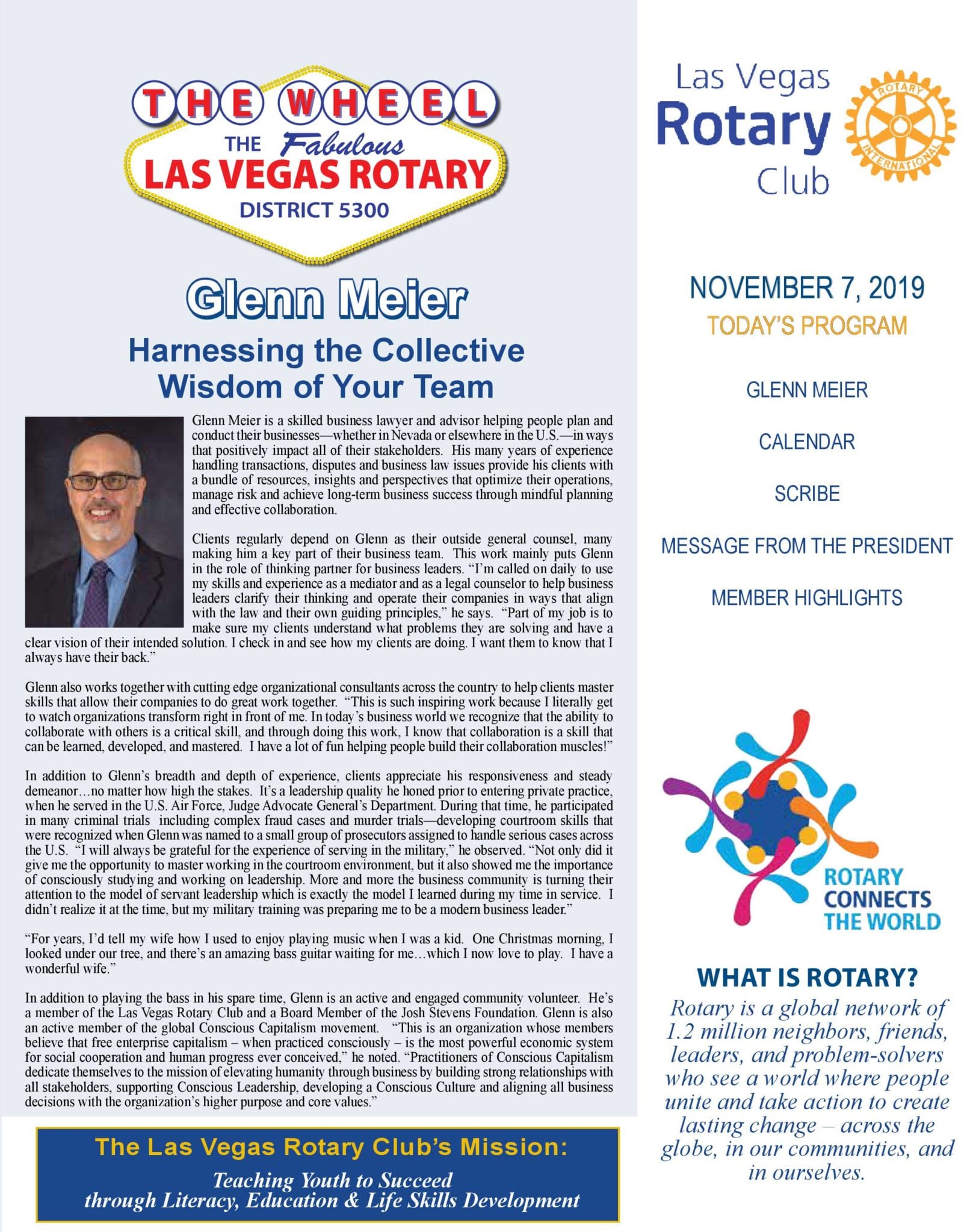 Harnessing the Collective Wisdom of Your Team 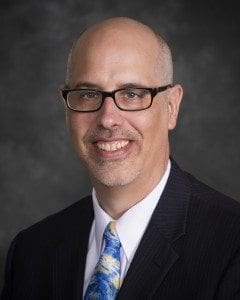 Glenn Meier is a skilled business lawyer and advisor helping people plan and conduct their businesses ­ whether in Nevada or elsewhere in the U.S. ­ in ways that positively impact all of their stakeholders. His many years of experience handling transactions, disputes  business law issues provide his clients with a bundle of resources, insights and perspectives that optimize their operations, manage risk and achieve long-term business success through mindful planning and effective collaboration. “I’m at my best,” Glenn notes, “when I’m helping my clients make their business relationships work better. Sometimes that means helping them build the relationship from scratch and sometimes it means helping them restore a damaged relationship. Regardless of the entry point, I work with people to strengthen those relationships and design legal agreements that support them.”

Clients regularly depend on Glenn as their outside general counsel, many making him a key part of their business team. This work mainly puts Glenn in the role of thinking partner for business leaders “I’m called on daily to use my skills and experience as a mediator and as a legal counselor to help business leaders clarify their thinking and operate their companies in ways that align with the law and their own guiding principles,” he says. “Part of my job is to make sure my clients understand what problems they are solving and have a clear vision of their intended solution. I check in and see how my clients are doing. I want them to know that I always have their back.”

Glenn also works together with cutting edge organizational consultants across the country to help clients master skills that allow their companies to do great work together. “This is such inspiring work because I literally get to watch organizations transform right in front of me. In today’s business world we recognize that the ability to collaborate with others is a critical skill, and through doing this work, I know that collaboration is a skill that can be learned, developed, and mastered. I have a lot of fun helping people build their collaboration muscles!”

In addition to Glenn’s breadth and depth of experience, clients appreciate his responsiveness and steady demeanor…no matter how high the stakes. It’s a leadership quality he honed prior to entering private practice when he served in the U.S. Air Force, Judge Advocate General’s Department. During that time, he participated in many criminal trials ­ including complex fraud cases and murder trials ­ developing courtroom skills that were recognized when Glenn was named to a small group of prosecutors assigned to handle serious cases across the U.S. “I will always be grateful for the experience of serving in the military,” he observed. “Not only did it give me the opportunity to master working in the courtroom environment, but it also showed me the importance of consciously studying and working on leadership. More and more the business community is turning their attention to the model of servant leadership which is exactly the model I learned during my time in service. I didn’t realize it at the time, but my military training was preparing me to be a modern business leader.”

“For years, I’d tell my wife how I used to enjoy playing music when I was a kid. One Christmas morning, I
looked under our tree, and there’s an amazing bass guitar waiting for me…which I now love to play. I have a
wonderful wife.”
In addition to playing the bass in his spare time, Glenn is an active and engaged community volunteer. He’s
a member of the Las Vegas Rotary Club and a Board Member of the Josh Stevens Foundation. Glenn is also
an active member of the global Conscious Capitalism movement. “This is an organization whose members
believe that free enterprise capitalism – when practiced consciously – is the most powerful economic system
for social cooperation and human progress ever conceived,” he noted. “Practitioners of Conscious Capitalism
dedicate themselves to the mission of elevating humanity through business by building strong relationships with
all stakeholders, supporting Conscious Leadership, developing a Conscious Culture and aligning all business
decisions with the organization’s higher purpose and core values.”

This week we are honored to hear from one of our own, Glenn Meier. He will be speaking about team. I would like to give my thoughts and experiences with the Teams I have had the privilege to be a part of over the years.

One of my mentors, Tony Robbins, is very descriptive about teams and how important they are. He said that people want so much to be a part of a team, that they will do almost anything, even negative to know that we care. By negative he meant, that some people will actually become ill because of the attention they can receive. And, if they go to the hospital, they will get heaps of attention from their team of family and friends. We are all part of teams whether negative or positive. How we view are teams is on us as individuals.  There is the city of Las Vegas team, the State of Nevada team, the United States team and the ultimate team we all belong to, Humanity. These are our personal teams and most of the time we don’t think much about these teams. In today’s world it might be well worth us considering these personal teams and realize that even though team members do vary by gender, professions, visions, differences of opinion etc., we are still a part of these teams.

So, okay what about our professional teams? They are obvious. We can all know that we are a part of team called co-workers. That is what our speaker will discuss today.

I will write about some of my greatest team experiences. One of the earlier teams was the one I have already referenced. I was a Personal Development Coach for Tony Robbins. During the decade associated with Tony, I, along with the many other participants in his live seminars were a part of a team that included empowerment, business skills, coaching skills and more. Major breakthroughs often came during the fire walks where the participants experienced power and a can-do attitude. Other times during personal one-on-one coaching.

My next amazing team was during the years working in Law Enforcement. Everyone in the department knew the importance of team and how each member of the team must perform at the highest level to protect the city and each other. Another amazing team was the US Forest Service serving at Lake Tahoe. This team learned about conservation and preservation of the beauty of the Lake and surrounding area. One of our many assignments was in fire control by keeping the fire hazards as minimal as possible.

However, by far the greatest team I am so honored to by a part of is Rotary. Rotarians are a  team with a purpose. With our local and international service projects we affect the lives of those in the teams I mentioned above, the city, the State, country and humanity. We know so well the many ways our Rotary family, our team members impact the human condition especially in areas of the world that need it most.

Rotary truly is “Service Above Self” 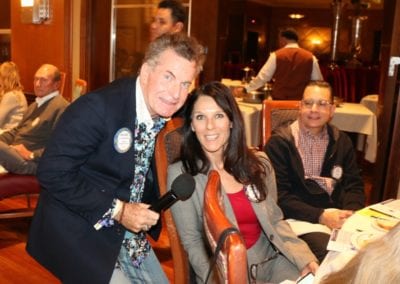 This week’s Sergeant At Arms Michael Williams and Rosalee Hedrick posed for a picture. 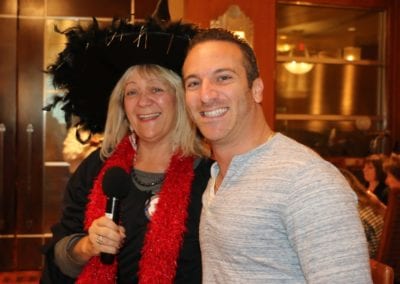 Rose Falocco was joined for lunch by her son Joey. 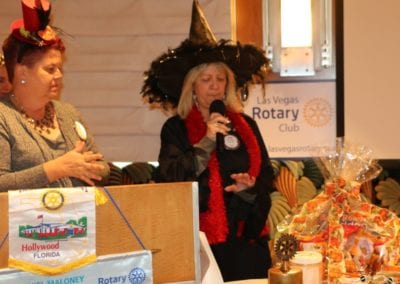 Rose and Janet Lencke auctioned a gift basket that Rose made. 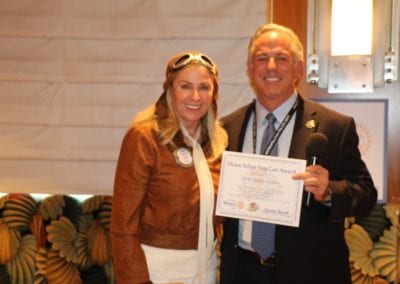 President Jackie presented our speaker Sheriff Joe Lombardo our Share What You Can Award. 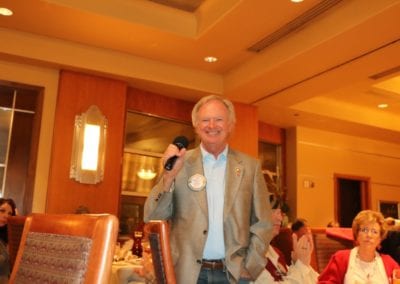 PP Tom Krob gave us a recap of the cigar social. 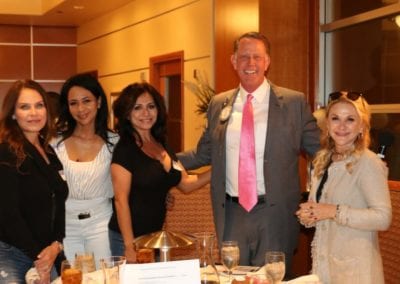 PP Russ Swain introduced his friend and her friends from Phoenix…..Greedy.. one girlfriend is not enough. 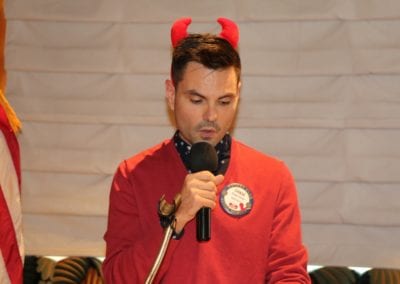 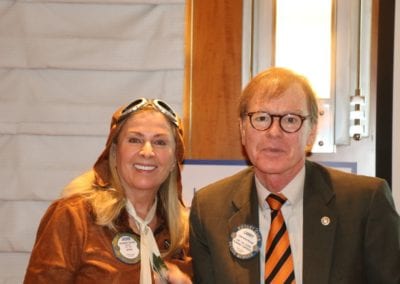 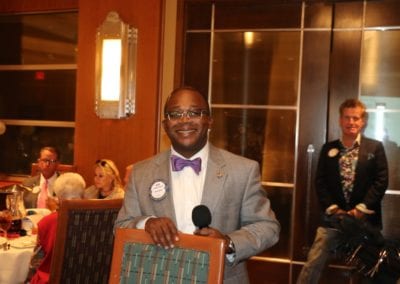 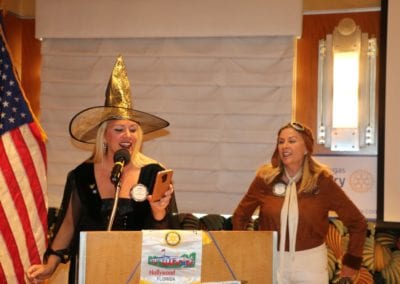 Jaime Goldsmith led us in song with “Superstitious”. 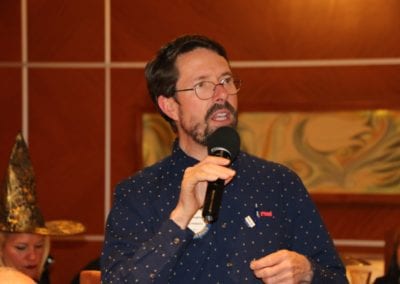 Bill Houghton reminded everyone about the upcoming TLC on Dec 6th through the 8th. 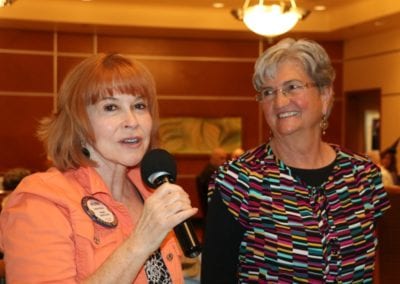 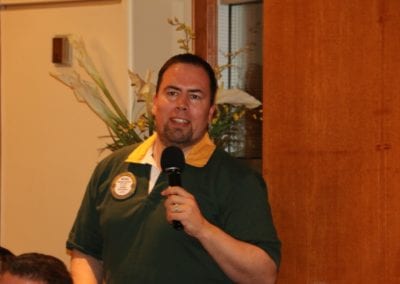 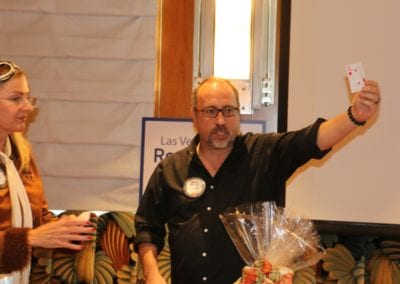 Aaron Overton missed his chance at the Joker.