Listen to Diana Bennett – Future of Gaming in NV & The World 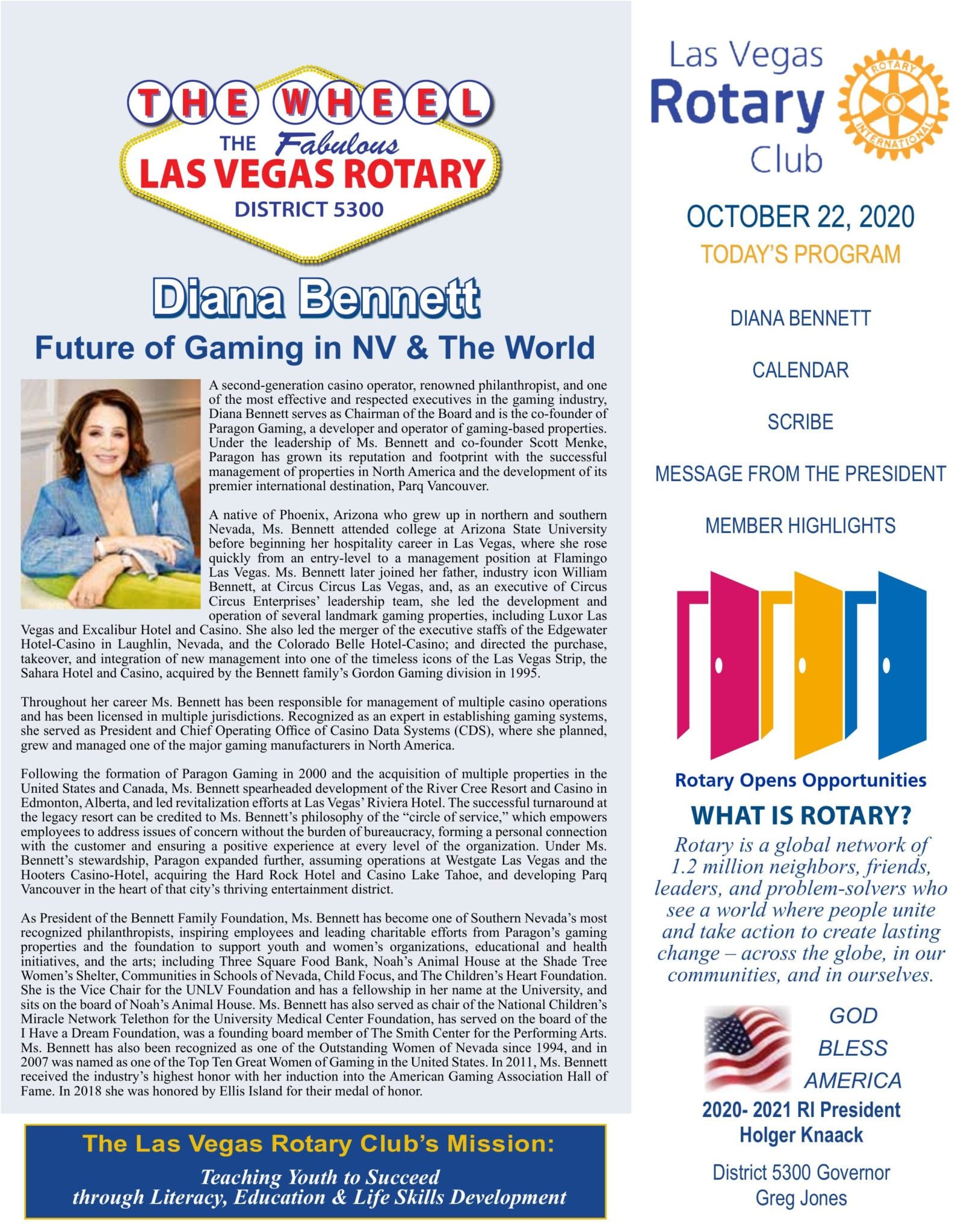 Diana Bennett – Future of Gaming in NV & The World

A second-generation casino operator, renowned philanthropist, and one of the most effective and respected executives in the gaming industry, Diana Bennett serves as Chairman of the Board and is the co-founder of Paragon Gaming, a developer and operator of gaming-based properties. Under the leadership of Ms. Bennett and co-founder Scott Menke, Paragon has grown its reputation and footprint with the successful management of properties in North America and the development of its premier international destination, Parq Vancouver.

A native of Phoenix, Arizona who grew up in northern and southern Nevada, Ms. Bennett attended college at Arizona State University before beginning her hospitality career in Las Vegas, where she rose quickly from an entry-level to a management position at Flamingo Las Vegas. Ms. Bennett later joined her father, industry icon William Bennett, at Circus Circus Las Vegas, and, as an executive of Circus Circus Enterprises’ leadership team, she led the development and operation of several landmark gaming properties, including Luxor Las Vegas and Excalibur Hotel and Casino. She also led the merger of the executive staffs of the Edgewater Hotel-Casino in Laughlin, Nevada, and the Colorado Belle Hotel-Casino; and directed the purchase, takeover, and integration of new management into one of the timeless icons of the Las Vegas Strip, the Sahara Hotel and Casino, acquired by the Bennett family’s Gordon Gaming division in 1995.

Throughout her career Ms. Bennett has been responsible for management of multiple casino operations and has been licensed in multiple jurisdictions. Recognized as an expert in establishing gaming systems, she served as President and Chief Operating Offi ce of Casino Data Systems (CDS), where she planned, grew and managed one of the major gaming manufacturers in North America.

Following the formation of Paragon Gaming in 2000 and the acquisition of multiple properties in the United States and Canada, Ms. Bennett spearheaded development of the River Cree Resort and Casino in Edmonton, Alberta, and led revitalization efforts at Las Vegas’ Riviera Hotel. The successful turnaround at the legacy resort can be credited to Ms. Bennett’s philosophy of the “circle of service,” which empowers employees to address issues of concern without the burden of bureaucracy, forming a personal connection with the customer and ensuring a positive experience at every level of the organization. Under Ms. Bennett’s stewardship, Paragon expanded further, assuming operations at Westgate Las Vegas and the Hooters Casino-Hotel, acquiring the Hard Rock Hotel and Casino Lake Tahoe, and developing Parq Vancouver in the heart of that city’s thriving entertainment district.

As President of the Bennett Family Foundation, Ms. Bennett has become one of Southern Nevada’s most recognized philanthropists, inspiring employees and leading charitable efforts from Paragon’s gaming properties and the foundation to support youth and women’s organizations, educational and health initiatives, and the arts; including Three Square Food Bank, Noah’s Animal House at the Shade Tree Women’s Shelter, Communities in Schools of Nevada, Child Focus, and The Children’s Heart Foundation. She is the Vice Chair for the UNLV Foundation and has a fellowship in her name at the University, and sits on the board of Noah’s Animal House. Ms. Bennett has also served as chair of the National Children’s Miracle Network Telethon for the University Medical Center Foundation, has served on the board of the I Have a Dream Foundation, was a founding board member of The Smith Center for the Performing Arts. Ms. Bennett has also been recognized as one of the Outstanding Women of Nevada since 1994, and in 2007 was named as one of the Top Ten Great Women of Gaming in the United States. In 2011, Ms. Bennett received the industry’s highest honor with her induction into the American Gaming Association Hall of Fame. In 2018 she was honored by Ellis Island for their medal of honor.

I am beyond thrilled to see that we have so many fantastic programs and events going on right now that there is no room left in this week’s Wheel for a full page message from the President. We say that we are the greatest Rotary Club in the World, but as this edition of the Wheel demonstrates it is more accurate to say we are the greatest, busiest and most sharply focused on service to others Rotary Club in the world.

Thank you to all of you for all that you are doing!

Richard Jost presented our speaker with a “Share What You Can” award to benefit a veteran in need and then adjourned the meeting.