Listen to Ryann Juden – The State of the City: N. Las Vegas 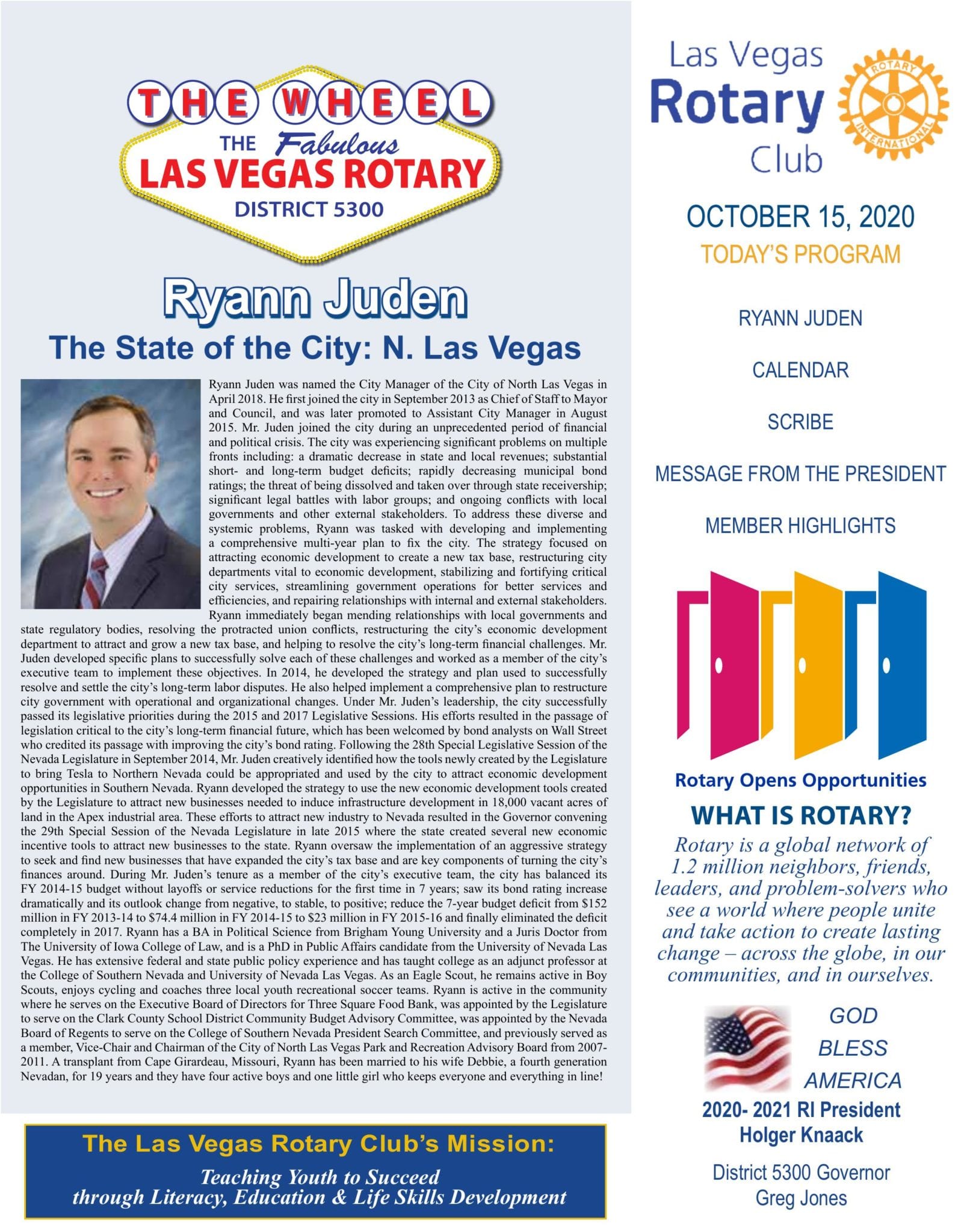 Ryann Juden – The State of the City: N. Las Vegas

Ryann Juden was named the City Manager of the City of North Las Vegas in April 2018. He first joined the city in September 2013 as Chief of Staff to Mayor and Council, and was later promoted to Assistant City Manager in August 2015. Mr. Juden joined the city during an unprecedented period of financial and political crisis. The city was experiencing significant problems on multiple fronts including: a dramatic decrease in state and local revenues; substantial short- and long-term budget deficits; rapidly decreasing municipal bond ratings; the threat of being dissolved and taken over through state receivership; significant legal battles with labor groups; and ongoing conflicts with local governments and other external stakeholders. To address these diverse and systemic problems, Ryann was tasked with developing and implementing a comprehensive multi-year plan to fix the city. The strategy focused on attracting economic development to create a new tax base, restructuring city departments vital to economic development, stabilizing and fortifying critical city services, streamlining government operations for better services and efficiencies, and repairing relationships with internal and external stakeholders. Ryann immediately began mending relationships with local governments and state regulatory bodies, resolving the protracted union conflicts, restructuring the city’s economic development department to attract and grow a new tax base, and helping to resolve the city’s long-term financial challenges. Mr. Juden developed specific plans to successfully solve each of these challenges and worked as a member of the city’s executive team to implement these objectives. In 2014, he developed the strategy and plan used to successfully resolve and settle the city’s long-term labor disputes. He also helped implement a comprehensive plan to restructure city government with operational and organizational changes. Under Mr. Juden’s leadership, the city successfully passed its legislative priorities during the 2015 and 2017 Legislative Sessions. His efforts resulted in the passage of legislation critical to the city’s long-term financial future, which has been welcomed by bond analysts on Wall Street who credited its passage with improving the city’s bond rating. Following the 28th Special Legislative Session of the Nevada Legislature in September 2014, Mr. Juden creatively identified how the tools newly created by the Legislature to bring Tesla to Northern Nevada could be appropriated and used by the city to attract economic development opportunities in Southern Nevada. Ryann developed the strategy to use the new economic development tools created by the Legislature to attract new businesses needed to induce infrastructure development in 18,000 vacant acres of land in the Apex industrial area. These efforts to attract new industry to Nevada resulted in the Governor convening the 29th Special Session of the Nevada Legislature in late 2015 where the state created several new economic incentive tools to attract new businesses to the state. Ryann oversaw the implementation of an aggressive strategy to seek and find new businesses that have expanded the city’s tax base and are key components of turning the city’s finances around. During Mr. Juden’s tenure as a member of the city’s executive team, the city has balanced its FY 2014-15 budget without layoffs or service reductions for the first time in 7 years; saw its bond rating increase dramatically and its outlook change from negative, to stable, to positive; reduce the 7-year budget deficit from $152 million in FY 2013-14 to $74.4 million in FY 2014-15 to $23 million in FY 2015-16 and finally eliminated the deficit completely in 2017. Ryann has a BA in Political Science from Brigham Young University and a Juris Doctor from The University of Iowa College of Law, and is a PhD in Public Affairs candidate from the University of Nevada Las Vegas. He has extensive federal and state public policy experience and has taught college as an adjunct professor at the College of Southern Nevada and University of Nevada Las Vegas. As an Eagle Scout, he remains active in Boy Scouts, enjoys cycling and coaches three local youth recreational soccer teams. Ryann is active in the community where he serves on the Executive Board of Directors for Three Square Food Bank, was appointed by the Legislature to serve on the Clark County School District Community Budget Advisory Committee, was appointed by the Nevada Board of Regents to serve on the College of Southern Nevada President Search Committee, and previously served as a member, Vice-Chair and Chairman of the City of North Las Vegas Park and Recreation Advisory Board from 2007-2011. A transplant from Cape Girardeau, Missouri, Ryann has been married to his wife Debbie, a fourth generation Nevadan, for 19 years and they have four active boys and one little girl who keeps everyone and everything in line!

There is a saying that goes, ‘you can’t understand another person’s feelings or motivations or struggles until you have walked a mile in their shoes’. As we look around at the disagreements and problems causing so much trouble today, that might seem like too tall of an order, too much to ask.

There is one problem that we should not find that intimidating, the disconnect between elementary or high school students and a normal school year. We were all that age once and can remember the highs and lows of our student experience. Today many of those experiences have been taken away by a pandemic that has upended our lives and theirs. We do not have to work hard to imagine what has been lost or what that feels like – we were there once ourselves and have first-hand knowledge of what current students are missing out on. We have already walked a mile in their shoes. We can and should feel empathy for them.

Our club is taking action to restore normal to local students through our literacy programs, by providing Halloween treats for teachers to give out to students, and through our signature Santa Clothes program. We can do more. Please send me a note (e-mail would be fine) describing the new program that you would like to organize and chair that will help our local students find a little more of the normal that we enjoyed when we were at that stage in our lives. Think creatively. Think big. Think about things that our club can do in partnership with other local Rotary Clubs or other local youth organizations. Think about the opportunities. Our club can accomplish difficult tasks in an impressively short period of time, and impossible tasks only take a slightly longer time to become completed, possible tasks.

Great service clubs have more than great histories, they have great futures. Ours is bright, but you can make it even brighter.

–  Caitlin Turkovich was inducted. Her sponsor is Brian Sorrentino.  Fun fact about Caitlin is that she used to attend her father’s Rotary meetings in San Luis Obispo when in high school.

Rose Falocco introduced our program speakers: Bryan Coy, CFO of the Vegas Golden Knights and Sportscaster Daren Millard.  They provided an in-depth description of the team, hockey, expansion history, and many interesting VGK tidbits.  Also, at no time did either person divulge any secret identities of any VGK employees.  They mentioned how the VGK has essentially raised the bar on pre-game shows all over the NHL.  Bryan and Daren also gave us a peak at how NHL teams cooperate with each other to improve the sport as a whole.  Go Knights GO!