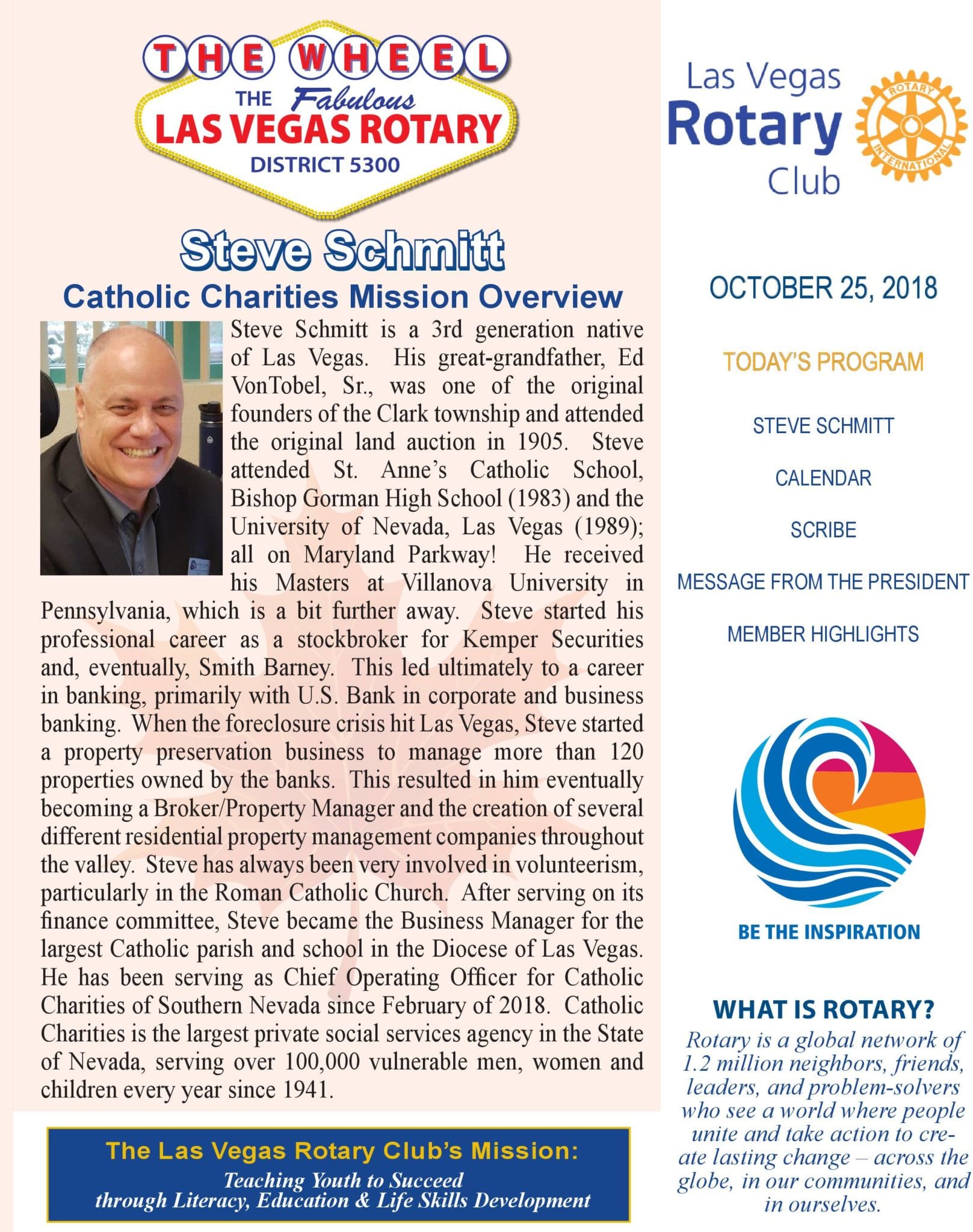 Steve Schmitt is a 3 rd generation native of Las Vegas.  His great-grandfather, Ed VonTobel, Sr., was one of the original founders of the Clark township and attended the original land auction in 1905.  Steve attended St. Anne’s Catholic School, Bishop Gorman High School (1983) and the University of Nevada, Las Vegas (1989); all on Maryland Parkway!  He received his Masters at Villanova University in Pennsylvania, which is a bit further away.  Steve started his professional career as a stockbroker for Kemper Securities and, eventually, Smith Barney.  This led ultimately to a career in banking, primarily with U.S. Bank in corporate and business banking.  When the foreclosure crisis hit Las Vegas, Steve started a property preservation business to manage more than 120 properties owned by the banks.  This resulted in him eventually becoming a Broker/Property Manager and the creation of several different residential property management companies throughout the valley.  Steve has always been very involved in volunteerism, particularly in the Roman Catholic Church.  After serving on its finance committee, Steve became the Business Manager for the largest Catholic parish and school in the Diocese of Las Vegas.  He has been serving as Chief Operating Officer for Catholic Charities of Southern Nevada since February of 2018.  Catholic Charities is the largest private social services agency in the State of Nevada, serving over 100,000 vulnerable men, women and children every year since 1941.

This week we will hear from Steven Schmitt of Catholic Charities. Catholic Charities and the Las Vegas Rotary Foundation, Inc., rely on charitable gifts to operate. As we head into the holiday season we will hear again the age-old adage that it is better to give gifts than to receive them. As a child, I believed that my parents coined this phrase to make sure I got gifts for my brother and sisters.

Rotarians are generally individuals who feel strongly about giving their time, treasure and/or talent to their local communities and beyond. Do we do it for others or for ourselves? The answer may surprise you. Research shows that donating to charity makes you feel better. Knowing that you are helping others is empowering and, in turn, can make you feel happier and more fulfilled. Researchers have determined that making a donation to charity increases activity in the area of the brain that registers pleasure. So it turns out the adage is true, not just something that my parents made up to make me buy gifts.

Together we have the power to improve the lives of others, and we do so through our donations of time, treasure and talent. As President, it has been my joy to hear the members report back each week about completed projects that benefitted the Las Vegas Valley; and to present checks to various charities that we have selected. The canned food drive is ongoing. The Halloween Party is this weekend. Santa Clothes and Opportunity Village are just around the corner. I encourage each of you to donate and go to these upcoming events. You just might feel better about yourself. 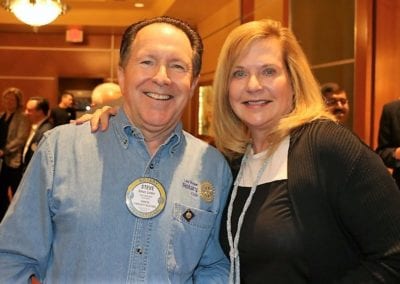 PP Steve joined with Kristy Keller for a photo. 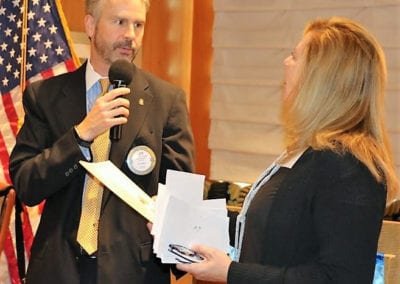 President Jim presented our speaker Kristy Keller with our Share What You Can Award. 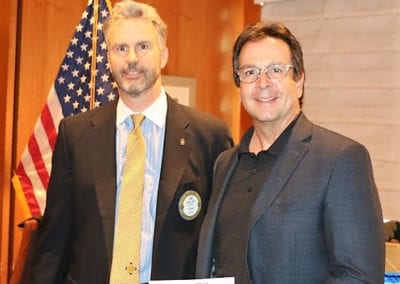 President Jim presented Mark Brown with a check on behalf of Las Vegas Rotary and Howard and Howard. 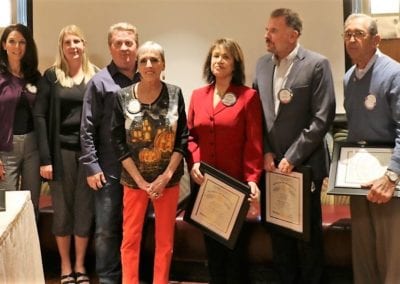 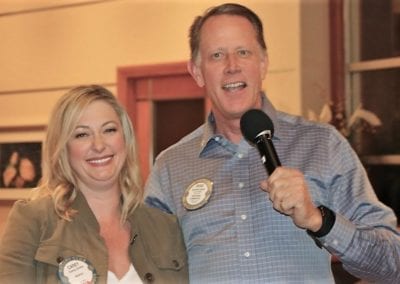 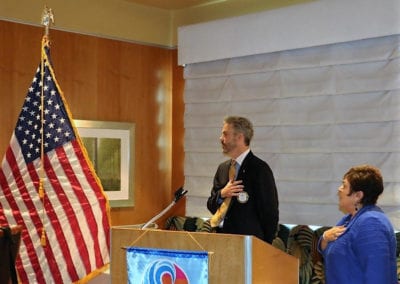 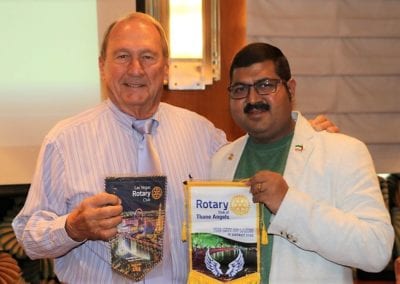 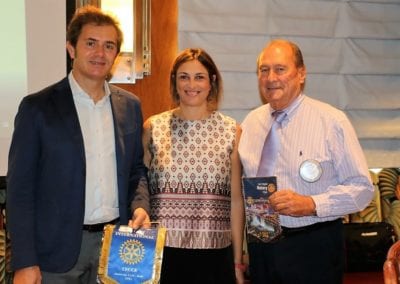 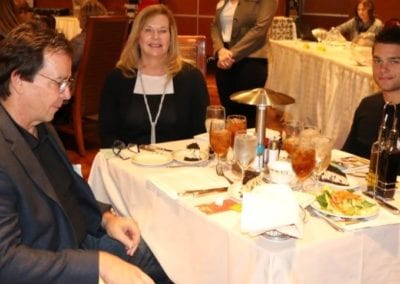 At our head table was Flight for Life CEO Mark Brown, our speaker Kristy Keller and Eric Astrameki. 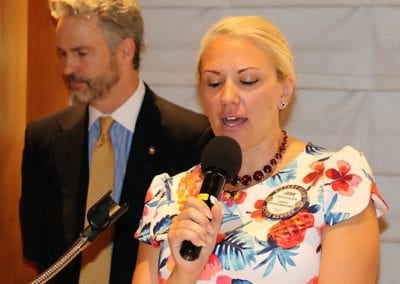 Jaime Goldsmith led us in prayer. 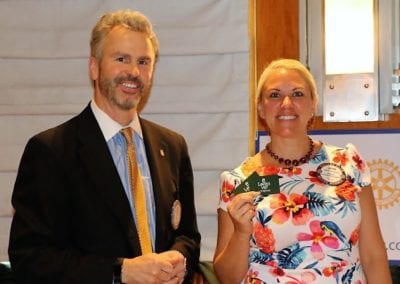 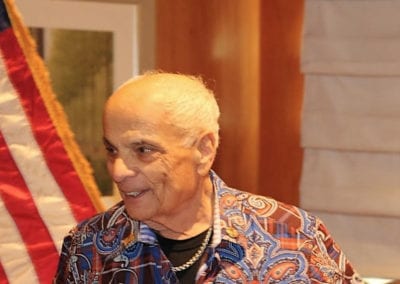 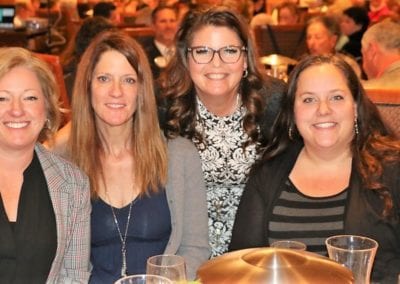 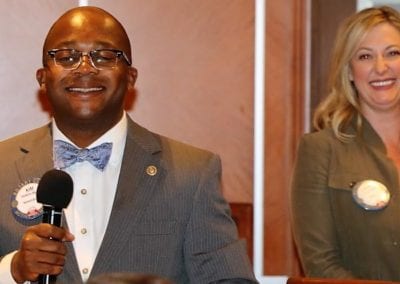 Kim Nyoni gave us information about our upcoming Halloween Party. 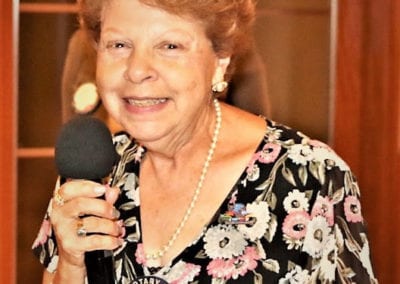 Marie Walsh paused and smiled during her breakfast with books announcement. 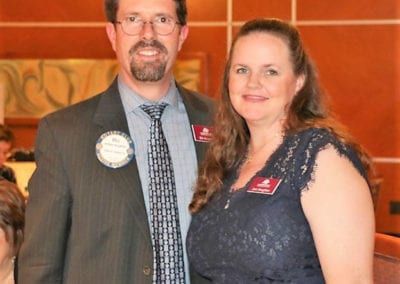 Our favorite printer Bill Houghton (The Wheel) was joined by his editor and wife Jeni. 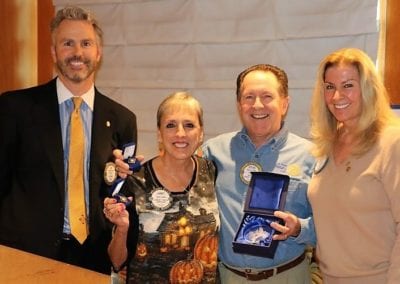 Past President Steve Linder and Janet were recognized as being a Major Donor to Rotary International. 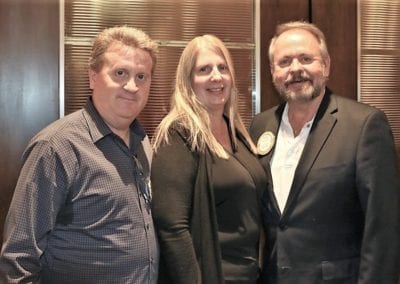