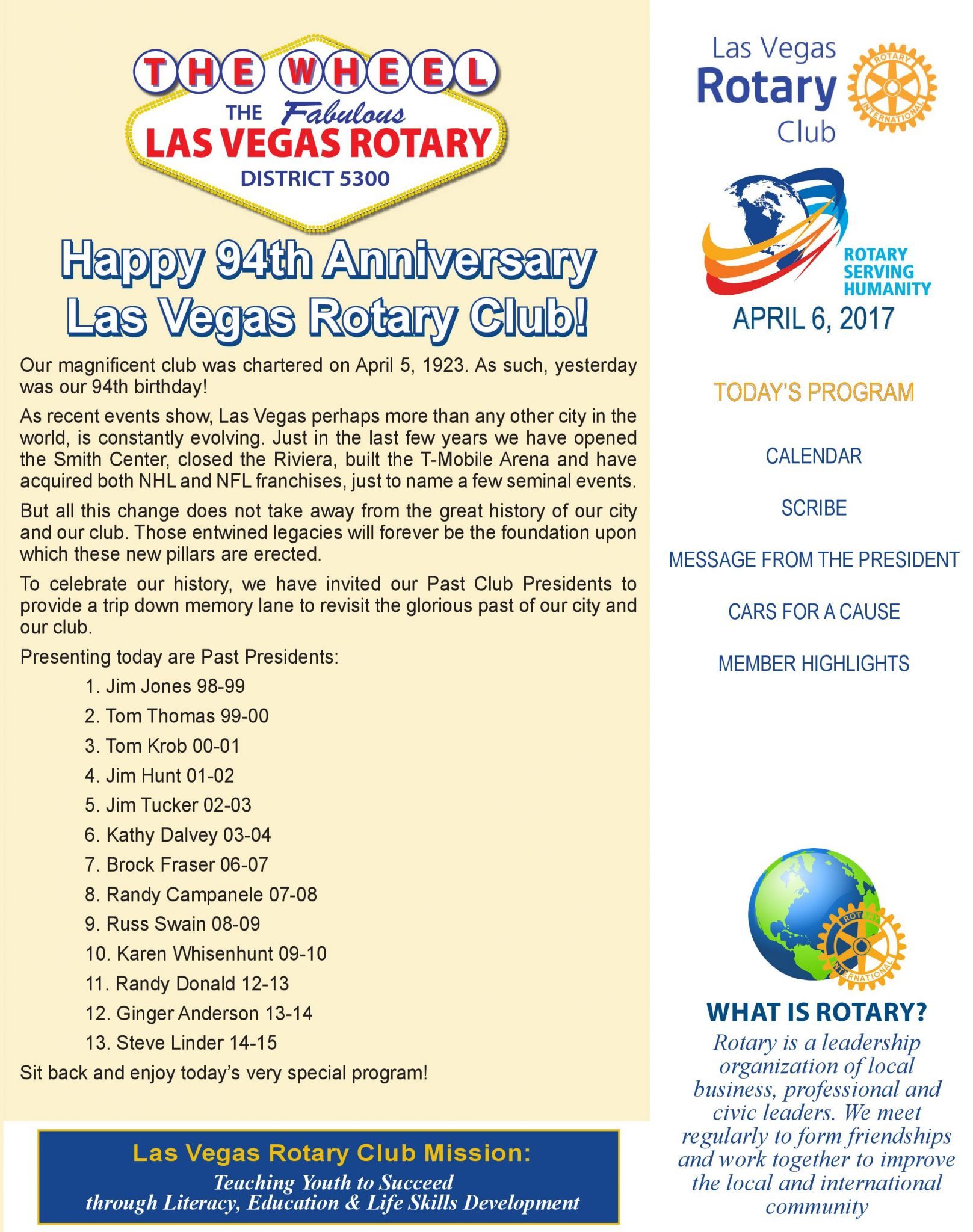 Our magnificent club was chartered on April 5, 1923. As such, yesterday was our 94th birthday!

As recent events show, Las Vegas perhaps more than any other city in the world, is constantly evolving. Just in the last few years we have opened the Smith Center, closed the Riviera, built the T-Mobile Arena and have acquired both NHL and NFL franchises, just to name a few seminal events.

But all this change does not take away from the great history of our city and our club. Those entwined legacies will forever be the foundation upon which these new pillars are erected.

To celebrate our history, we have invited our Past Club Presidents to provide a trip down memory lane to revisit the glorious past of our city and our club.

Presenting today are Past Presidents: 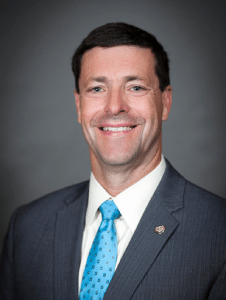 Last year we launched the Car Show as a replacement fund raiser to the golf tournament. Given the small number of golfers in the club combined with the large fixed costs of renting a course, the golf tournament had become a relatively ineffective way to raise money.

The objectives behind starting a car show were:

Now in year two our show has evolved and now has a name, the Cars for a Cause Show, and is already exceeded by a factor of 5 the money we raised last year. The committee is doing an OUTSTANDING job!

The show will be held THIS MONTH on Sunday April 23rd from 8am-2pm.

I would personally like to ask each of you to assist in some way. In particular, please invite your friends and colleagues to purchase raffle tickets.

Raffle ticket sales will be one of our major sources of funds from non-members.

Tickets can be purchased online (see this month’s 5th Wheel for links) and you do not need to be present to win so people from anywhere can buy tickets and win.

Thanks, and I look forward to raising lots of money to support our service! 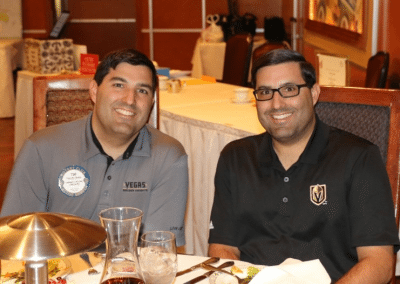 OK….Which one is /b>Tim Mullin and which is Tom Mullin. 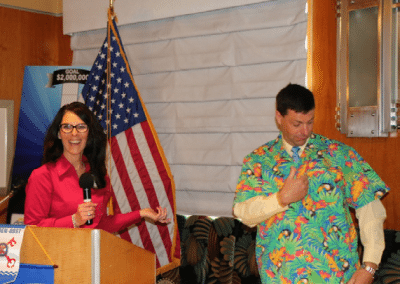 Rosalee Hedrick announced the dates for the District Conference and Dave displayed the Attire. 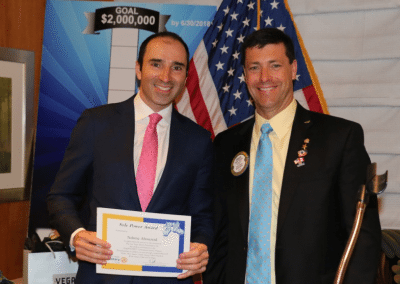 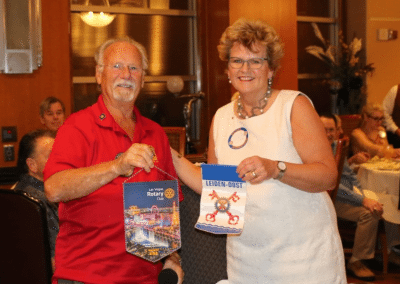 Bob Werner introduced and traded Banners with our international Guest from the Netherlands Anita America-Mantel. 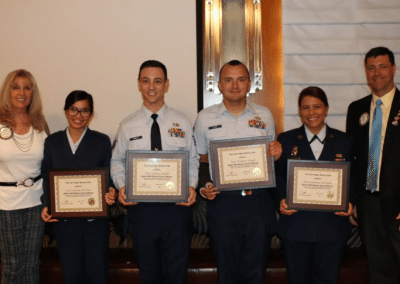 Jackie Thornhill and president Dave presented the Wetzel award winners to the club. 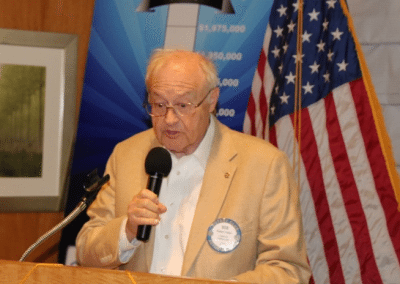 Bob Fisher is becoming our master of invocations. 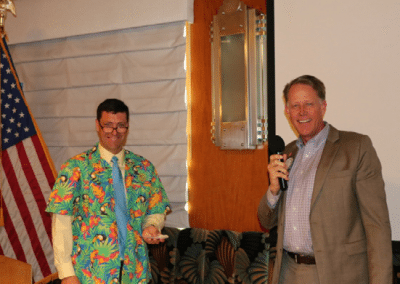 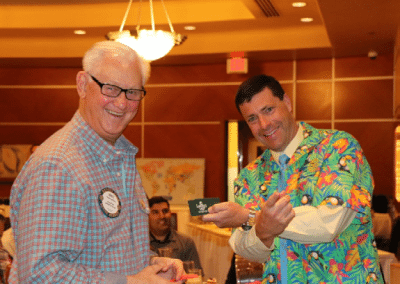 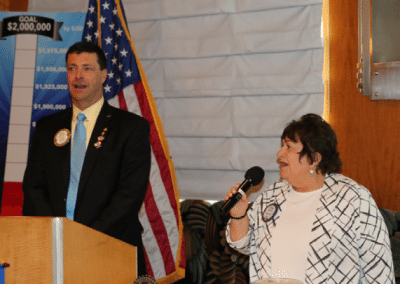 Sidra Kain led us in song with “God Bless America”. 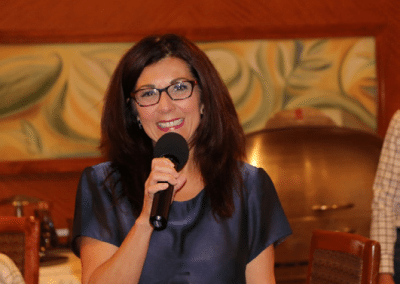 Francesca Gilbert announced that our representative won the area level speech contest. She now moves on to the regional level. 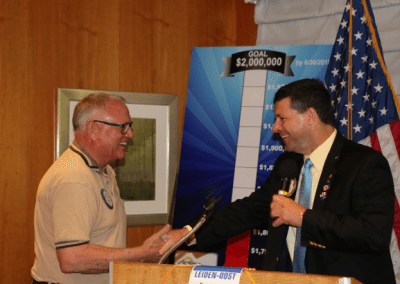 President Dave presents Ted McAdam with a Four Way Test Coin for his service to the club.

• President David Thorson called the meeting to order.
• Bob Fisher gave the invocation. Sidra Kain led the club in singing the “God Bless America.” The Pledge of Allegiance was recited and the Sergeant-at-Arms was 25 Club VP Erik Astramecki.
• There were (1) International Rotarians, (3) Visiting Rotarians and (4) Guests of Rotarians were introduced.
• The drawing began at $5,853.00 plus this week’s donations. The winner gets half the pot and half goes to the Las Vegas Rotary Foundation. Ticket Winner: Past President Russ Swain who won $10! Lawry Bucks Winner: Dr. Walt Rulffes.
• President David Thorson presented Ted McAdam with the March 4 Way Test Coin for all the work he does with the membership committee, the Dan Stover Music Contest and the Wetzel Awards and other service to the club.
• Francesca Gilbert announced that Alyssa Gnoysky, our representative for the speech contest won at the area level and will advance to the regional level.
• Jackie Thornhill and Ted McAdam presented the Wetzel award winners to the club: Airman Jasmine Gonzales, Sr. Airman Chelsea DeVera, Staff Sgt. Jeffrey Jenelle, Sr. Airman Ross Bachman and Staff Sgt. William Llyod.
• Bill Steiren reminded the club that the Test Site Tour is May 24, 2017 at 8am.
• Rosalee Hedrick announced that District Conference is May 19-21, 2017. A special edition Las Vegas Rotary Club shirt (modelled by President Dave) will be available for purchase.
• President Elect Michael Gordon reminded the club that the “Cars for a Cause” car show is April 23, 2017. All hands on deck for our primary fund raiser!
• Marie Walsh announced that the next Breakfast with Books is at Beckley on April 4, 2017 at 8am.
• Tim Mullen introduced the speaker, Nehme Abouzeid, Sr. VP and Chief Marketing Officer for the Vegas Golden Knights. Nehme reported that season ticket sales are close to being sold out and highlighted how they believe Las Vegas will help raise the visibility of the sport of hockey. Currently the team has one player and no coach so a lot of work to do between now and September. A special live expansion draft event at T-Mobile arena is scheduled soon.
• President David Thorson presented the speaker with the Sole Power Award and adjourned the meeting.