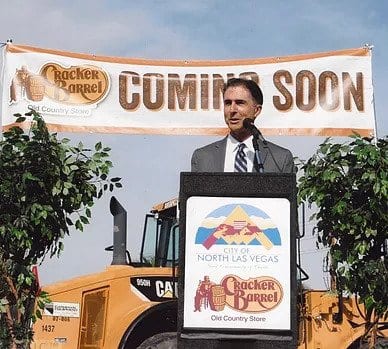 Mitch Fox managed all external and internal communications for the City of North Las Vegas, was Nevada State Director for the Porter Group, a Washington D.C. based lobbying firm and is currently President and CEO of the Nevada Broadcasters Association.

Born in San Francisco and a graduate of U.C.L.A., Mitch Fox began his broadcasting career at KABC-TV in Los Angeles, where he worked as a student intern and later, in a paid position, as an apprentice cameraman. His first on-air position was with KTNV-TV Channel 13 in Las Vegas

He produced an award-winning documentary series called “Real to Reel” and won an Emmy nomination. He received the Las Vegas Chamber of Commerce Community Achievement Award for Communications and was asked to be the commencement speaker at the graduation ceremonies of the University of Phoenix.

Mitch has been a freelance writer for the Las Vegas Review-Journal, the Las Vegas Sun, Newsweek and Nevada Magazine. He was host/producer of “Nevada Week in Review,” one of the community’s most watched public affairs talk shows. He has covered multiple sessions of the Nevada State Legislature for Nevada PBS stations.

He has moderated numerous candidates’ debates, some of which aired nationally on C-SPAN. In 2010 Mr. Fox was asked by the Nevada Broadcasters Association to be the moderator of the only debate between U.S. Senator Harry Reid and Sharron Angle. He has provided news reports and appeared on the PBS NewsHour program.

He collaborated with NBC and Fox affiliates to produce prime-time, election coverage. He has partnered with such media groups as KNPR, El Mundo, El Tiempo Libre, Univision, Power 88 KCEP-FM, KRLV 1340am and KNEWS Radio.

During his tenure at Vegas PBS, Mr. Fox supervised a staff of 27 with oversight of all studio and field production projects, including a non-salaried budget of nearly $1.4 million dollars. He later became director of programming with oversight of traffic operations and all local program origination.

For more than 25 years he worked with the Clark County School District to develop exciting and dynamic distance learning programs for K-12 students.

He also conducted a news media training seminar for the University of Nevada School of Medicine. He has hosted “State of Nevada” for KNPR-FM and taught news media interviewing at UNLV’s Hank Greenspun School of Journalism and Media Studies.

Mr. Fox was director of communications for the City of North Las Vegas and managed all external and internal communications including special events, media and public relations, internet and social media communications, the graphic art department and all video production, as well as advising the City Council and staff on public policy issues.

During his tenure, Mr. Fox brought City Council meetings to cable TV, supervised the redesign of the city’s web site, doubled the City’s social media traffic, created a City Podcast, launched an e-newsletter for Council members, created videos for the City’s YouTube channel and strengthened relations between the City of North Las Vegas and the media.

Mr. Fox is currently President and CEO of the Nevada Broadcasters Association, a trade organization that advocates on behalf of Nevada’s radio and television stations.

Mr. Fox was a board member of the Southern Nevada American Red Cross and serves on the Board of Directors of the Silver State Schools Credit Union and the Advisory Board of Nevada’s Western Governors University.