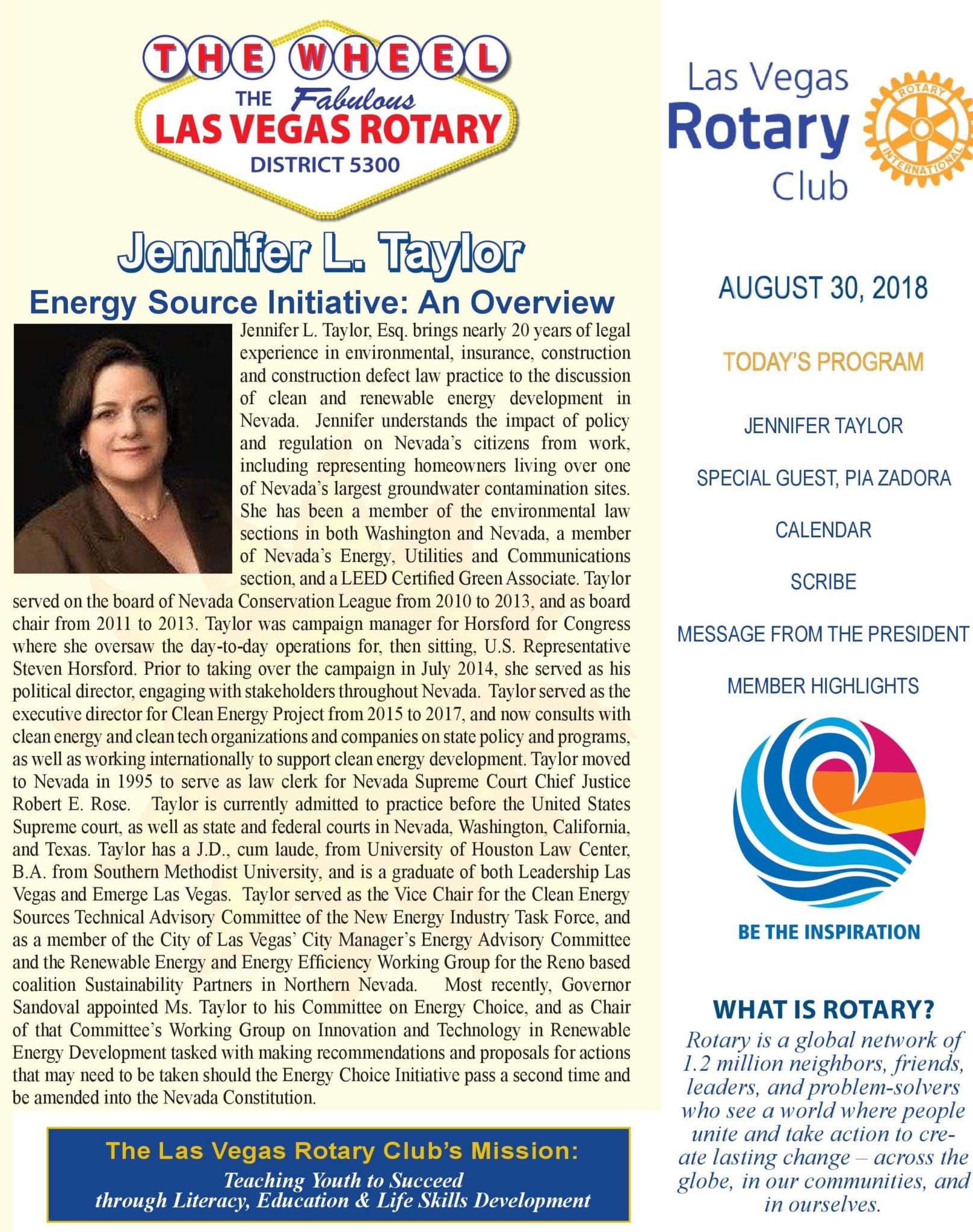 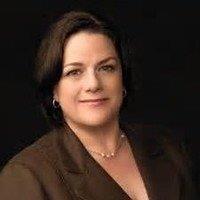 Jennifer L. Taylor, Esq. brings nearly 20 years of legal experience in environmental, insurance, construction and construction defect law practice to the discussion of clean and renewable energy development in Nevada. Jennifer understands the impact of policy and regulation on Nevada’s citizens from work, including representing homeowners living over one of Nevada’s largest groundwater contamination sites. She has been a member of the environmental law sections in both Washington and Nevada, a member of Nevada’s Energy, Utilities and Communications section, and a LEED Certified Green Associate.

Taylor served on the board of the Nevada Conservation League from 2010 to 2013, and as board chair from 2011 to 2013. Taylor was campaign manager for Horsford for Congress where she oversaw the day-to-day operations for, then sitting, U.S. Representative Steven Horsford. Prior to taking over the campaign in July 2014, she served as his political director, engaging with stakeholders throughout Nevada. Taylor served as the executive director for Clean Energy Project from 2015 to 2017, and now consults with clean energy and clean tech organizations and companies on state policy and programs, as well as working internationally to support clean energy development.

Taylor moved to Nevada in 1995 to serve as law clerk for Nevada Supreme Court Chief Justice Robert E. Rose. Taylor is currently admitted to practice before the United States Supreme court, as well as state and federal courts in Nevada, Washington, California, and Texas. Taylor has a J.D., cum laude, from University of Houston Law Center, B.A. from Southern Methodist University, and is a graduate of both Leadership Las Vegas and Emerge Las Vegas. Taylor served as the Vice Chair for the Clean Energy Sources Technical Advisory Committee of the New Energy Industry Task Force and as a member of the City of Las Vegas’ City Manager’s Energy Advisory Committee and the Renewable Energy and Energy Efficiency Working Group for the Reno based coalition Sustainability Partners in Northern Nevada. Most recently, Governor Sandoval appointed Ms. Taylor to his Committee on Energy Choice, and as Chair of that Committee’s Working Group on Innovation and Technology in Renewable Energy Development tasked with making recommendations and proposals for actions that may need to be taken should the Energy Choice Initiative pass a second time and be amended into the Nevada Constitution.

Memorial Day and Labor Day frame our summers. On Memorial Day we remember those who died while fighting for the United States. While most Americans understand that Labor Day is related to workers, beyond that its history is less clear. As we get ready to celebrate Labor Day this weekend I thought we should look at the circumstances around its creations and its meaning. We know that Labor Day was created to memorialize the social and economic achievements of American workers. Exactly who is responsible for first suggesting Labor Day is unclear. There are two individuals who are credited with suggesting the creation of Labor Day. Some historians credit Peter J. McGuire of Chicago with suggesting that Labor Day be celebrated. Others suggest that Matthew Maguire of New Jersey proposed the holiday to his union. Regardless of who suggested it first, historians point to the Labor Day celebration in New York City in 1882 as the celebration that brought it to national prominence.

While Labor Day was celebrated in 1882, it was not a national holiday at that time. It was a popular idea that caught on quickly. Between 1887 and 1894, 23 states enacted legislation creating a Labor Day holiday, most often opting for them to be observed on either the first Saturday or first Monday of September. On June 28, 1894, President Grover Cleveland signed legislation that had been rushed through Congress, declaring Labor Day a national holiday, to be observed on the first Monday in September. Labor Day is a celebration of the contributions workers have made to the strength, prosperity, and well-being of our country. I hope you enjoy your holiday weekend and are able to take a moment and contemplate the contributions that laborers made to this great country or ours. 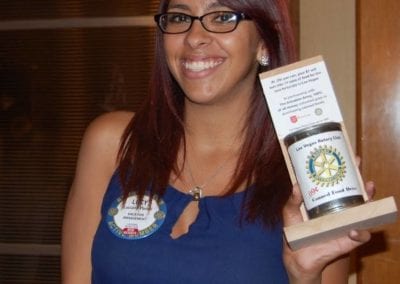 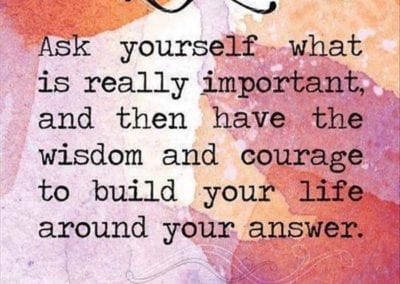 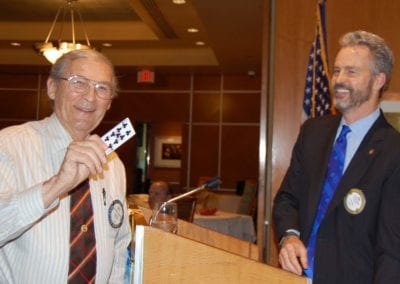 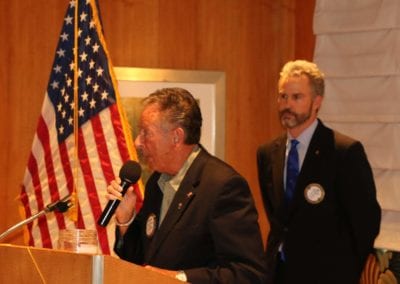 Blake Meyers opened the meeting with the Invocation. 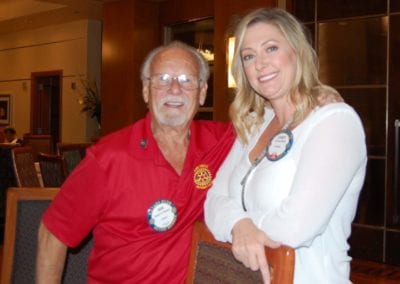 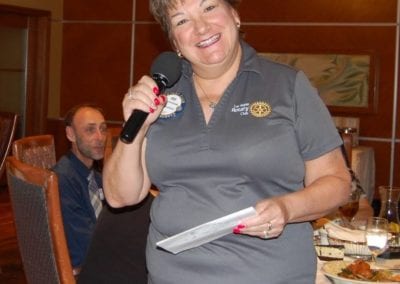 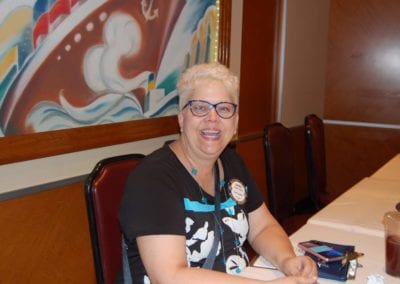 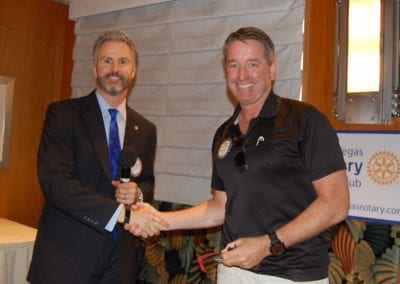 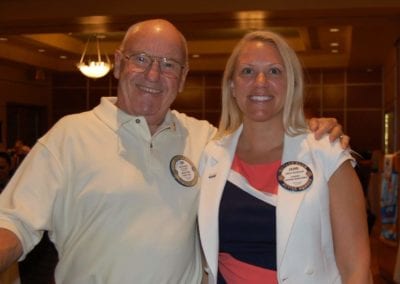 Past President Jim Tucker enjoying time “in front” of the camera with Jamie Goldsmith. 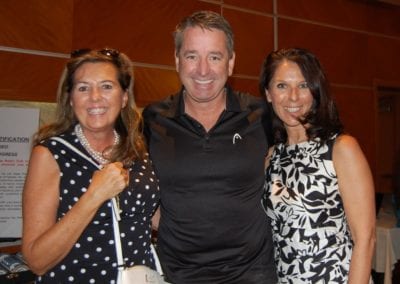 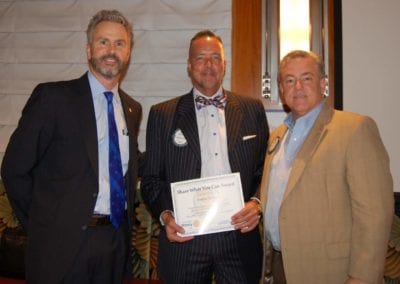 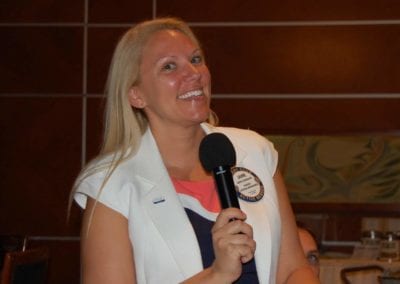 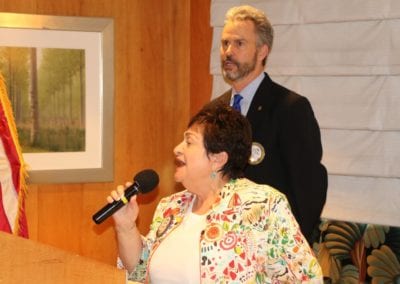 Sidra Kain let us in Song.