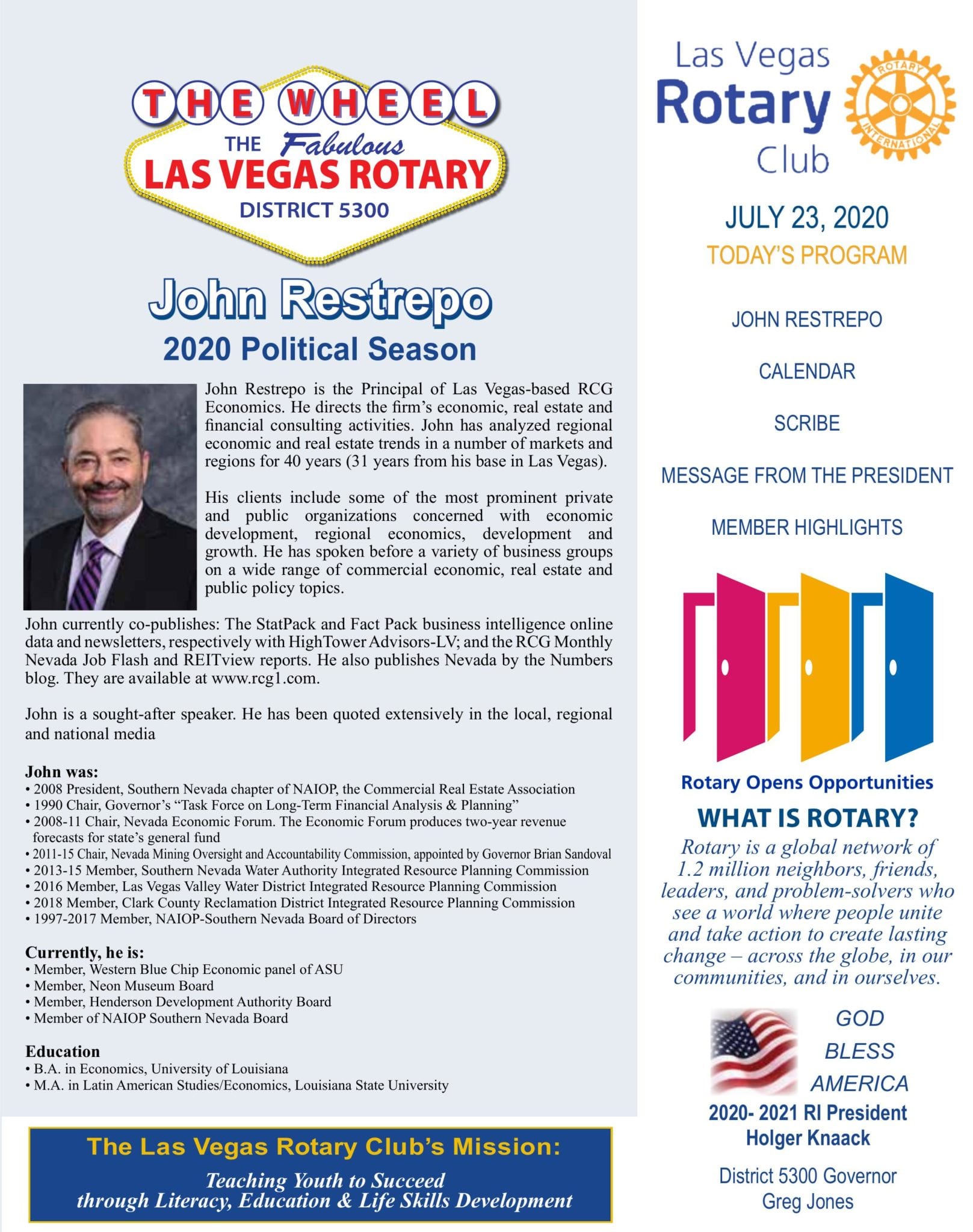 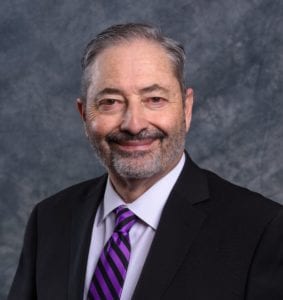 Who was that Masked Man?

For those of you who can remember the Lone Ranger and Tonto, you will recall that each episode ended with the rescued town folk asking each other those words as they wondered who to thank for their good fortune.

Today mask wearing has a different place in our daily conversations. When we were first introduced to the current virus, we received confusing advice from health organizations worried that there would not be enough masks for doctors, nurses, and other healthcare workers. That concern was probably not out of line, considering the run on toilet paper that occurred.

Then mask wearing left the realm of medicine and public health and entered the political arena at about the same time that we watched hospital systems being overwhelmed. Medical experts then got their act together and recommended bandanas or nonmedical grade facemasks as a way to slow down the spread of the virus.

Rotary continued to function as governments shut down business, sports, and large gatherings generally. Rotary International converted the annual international convention to an on-line format, and our club meetings went digital until our meeting place could accommodate us on a limited basis. However, we would need to wear face coverings when we were not eating, per a State rule in late June. In the final few days in June, the political issue became more confusing as prominent opponents of masks reversed course. Vice President Pence led a task force briefing that encouraged the wearing of masks, as as did Sen. McConnell, who stated that, “We must have no stigma – none – about wearing masks when we leave our homes.” Last week our guest speaker talked about artificial intelligence. He described how machines can be programmed to do repetitive tasks and to alert when something it is monitoring is not as it should be. Such artificial intelligence was contrasted with human intelligence, which includes understanding on a deeper level than just following directions. The example was given that if a machine has a set of instructions to follow but is unable to execute any one of those instructions, it cannot complete its task, unlike a human who would try to reason out a path forward around the obstacle. Connecting the conflicting and confusing messages that we are receiving about ways to slow down the spread of the current pandemic and reopen our schools, with the talk last week about artificial, and human, intelligence makes me optimistic that we will solve this problem. 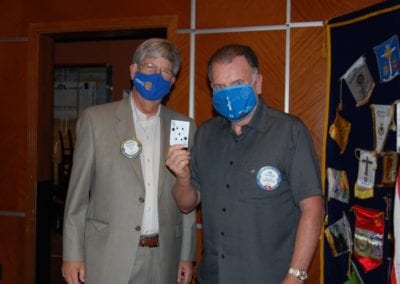 Val Hatley had the lucky ticket this week but not the lucky card. 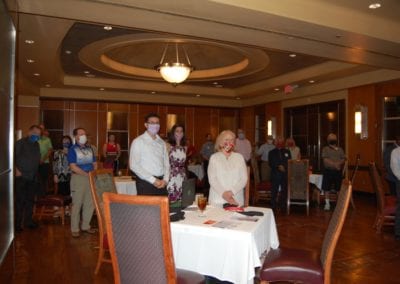 Rotarians in masks during the Patriotic Song. 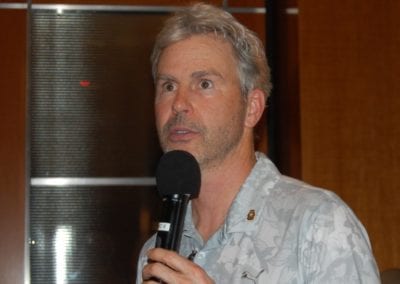 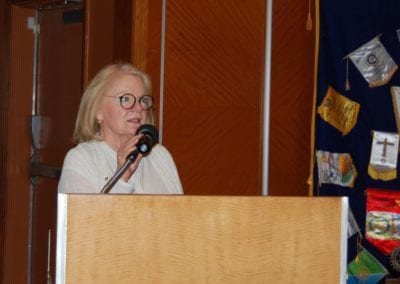 Our Speaker was introduced by Past President Caty Crockett. 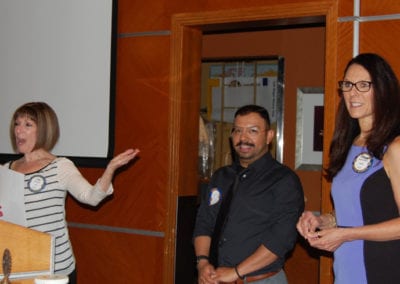 Las Vegas Rotary in partnershup with the Wheelchair Foundation. 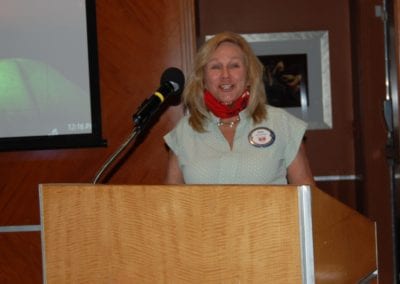 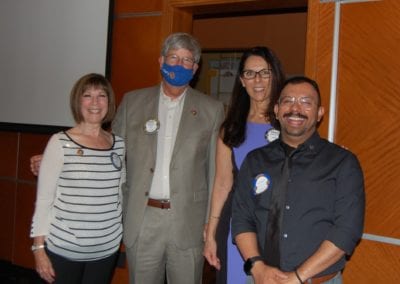 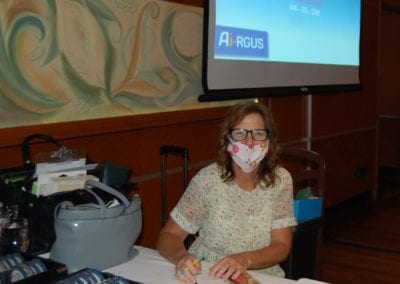 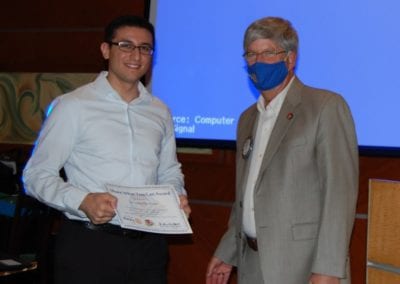 Daniel Reichman spoke on Artificial Intelligence and was awarded the Share What You Can Award by President Richard Jost. 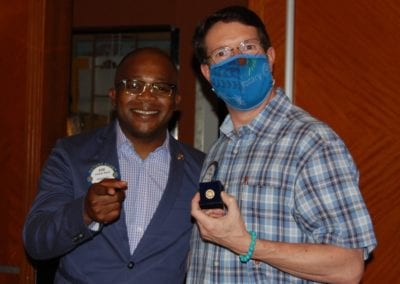 Las Vegas Rotary in partnershup with the Wheelchair Foundation.

• President Richard Jost called the meeting to order.
• Keri Serrano gave the invocation.
• Mike Mewborn was Sergeant at Arms.
• Capt. Kirk played “The Star Spangled Banner” and President Richard Jost led the Pledge of Allegiance.
• President Richard Jost made the following announcements and reminders:
• Please continue to RSVP to Shawn for the meetings at Lawrys as early and as far out as possible. Adding Zoom attendance as an option is under review. Facebook Live comments will be monitored during the live meeting so questions posted in the chat may be addressed. The Sergeant at Arms noted that people around the world were following today’s meeting.
• Please send your updated headshots and content to Shawn for the Roster.
• Watch for the upcoming online club survey. To drive participation all respondents will be entered to win a prize. More details to follow.
• The weekly drawing began at $5,702 plus this week’s donations. Val Hatley missed the Joker. Bert Reiner won the Lawry Bucks.
• PP Jim Kohl gave an update on Summer Santa Clothes-JC Penney not in a position to support this year, the team is working hard to find other options. Kohls is currently exploring their ability to support.
• Keri Serrano announced that she will be sending out more information and sign-up shortly for the pot-luck Alpine Picnic held at the Thomas home at Mt. Charleston. This event is a fun event where families are welcome for a day of fun, community ad togetherness.
• Joakim Nyoni honored Bill Houghton with his Paul Harris Plus 2 and John Ingeme has achieved his Plus 8.
• Rosalee Hedrick announced and Toni Kern inducted our newest member Alberto Angulo who works with the Clark County Library District.
• Catherine Crockett introduced our speaker Dr. Daniel Reichman, CEO and Chief Scientist of Ai-RGUS. He spoke of Artificial Intelligence (AI) and how it is used in automation in various industries with a focus on how we can benefit from AI. The field is very much in its infancy with so much possibility for future applications that require the computer to carry out long thought processes he finds very exciting. AI brings transparency, consistency and auditability to deployments. AI is responsible for recommendations we receive on Amazon and Netflix. Mobile check deposits are a common example of AI in our daily lives. Tasks that are similar and repetitive lend themselves well to an AI application.
• President Richard Jost presented our speaker with a “Share What You Can” award and then adjourned the meeting.