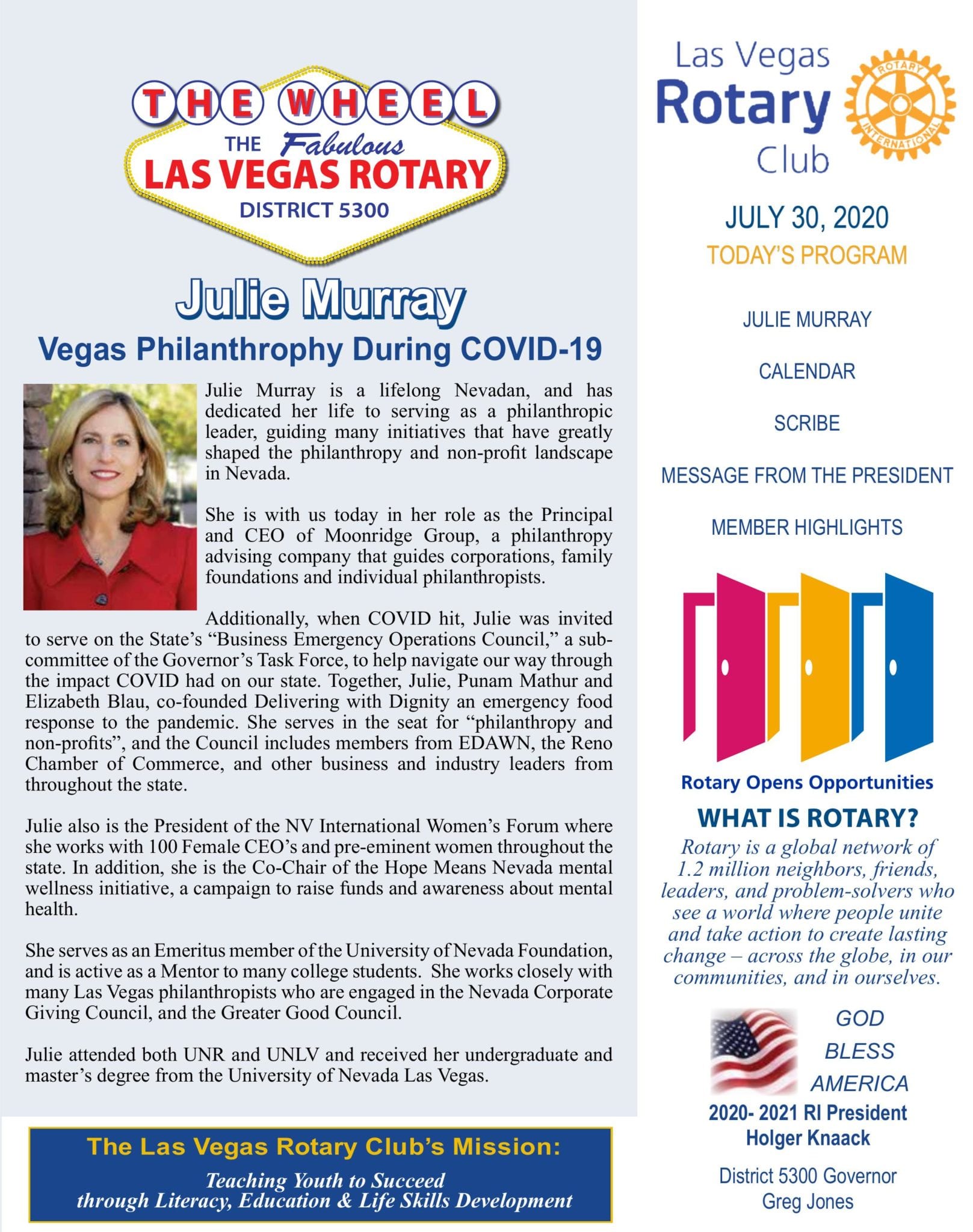 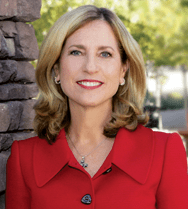 Julie Murray is a lifelong Nevadan, and has dedicated her life to serving as a philanthropic leader, guiding many initiatives that have greatly shaped the philanthropy and non-profit landscape in Nevada.

She is with us today in her role as the Principal and CEO of Moonridge Group, a philanthropy advising company that guides corporations, family foundations and individual philanthropists.

Additionally, when COVID hit, Julie was invited to serve on the State’s “Business Emergency Operations Council,” a sub-committee of the Governor’s Task Force, to help navigate our way through the impact COVID had on our state. Together, Julie, Punam Mathur and Elizabeth Blau, co-founded Delivering with Dignity an emergency food response to the pandemic. She serves in the seat for “philanthropy and non-profits”, and the Council includes members from EDAWN, the Reno Chamber of Commerce, and other business and industry leaders from throughout the state.

Julie also is the President of the NV International Women’s Forum where she works with 100 Female CEO’s and pre-eminent women throughout the state. In addition, she is the Co-Chair of the Hope Means Nevada mental wellness initiative, a campaign to raise funds and awareness about mental health.

She serves as an Emeritus member of the University of Nevada Foundation, and is active as a Mentor to many college students. She works closely with many Las Vegas philanthropists who are engaged in the Nevada Corporate Giving Council, and the Greater Good Council.

Julie attended both UNR and UNLV and received her undergraduate and master’s degree from the University of Nevada Las Vegas.

When the stock market crashed in 1929, the general feeling, at least among people who were not stockbrokers, was that the economy was hurt but would recover quickly.
That optimism gradually faded as banks failed and the Federal Reserve made wrong monetary policy decisions that brought on the Great Depression.

Our Nevada Constitution requires in Article 5, Section 10, that the Governor deliver a state of the state message to the State Legislature, when it convenes in regular sessions, in February of odd numbered years. So it was that Nevada Governor F.B. Balzar was faced with delivering such a message on January 20, 1931.

He noted the economic depression and unemployment creating financial stress nationwide with deep regret but pointed out that such stress was felt less in Nevada than elsewhere. In part he attributed Nevada’s less dire situation to the federal expenditures on the Boulder Canyon Project.

Beyond those dollars for the construction of Boulder Dam, he went on to observe that, “Our people, largely descendants of hardy pioneers, are not dismayed in these times of national stress, feeling that they can and will work out their own salvation and carry on until prosperity again reigns throughout the Nation”.

Today, nearly a century later, the composition of our Nevada citizenry has changed somewhat, and we are again facing financial stress. Fortunately for our state, we have strong Rotary Clubs populated with Rotarians who embrace the opportunity to serve our local and statewide communities. Future state of the state messages may not be able to identify that many citizens who can trace their roots to someone who arrived in Nevada in a covered wagon, but they can recognize Rotarians as the worthy successors to those hardy pioneers because we will carry on until prosperity returns.