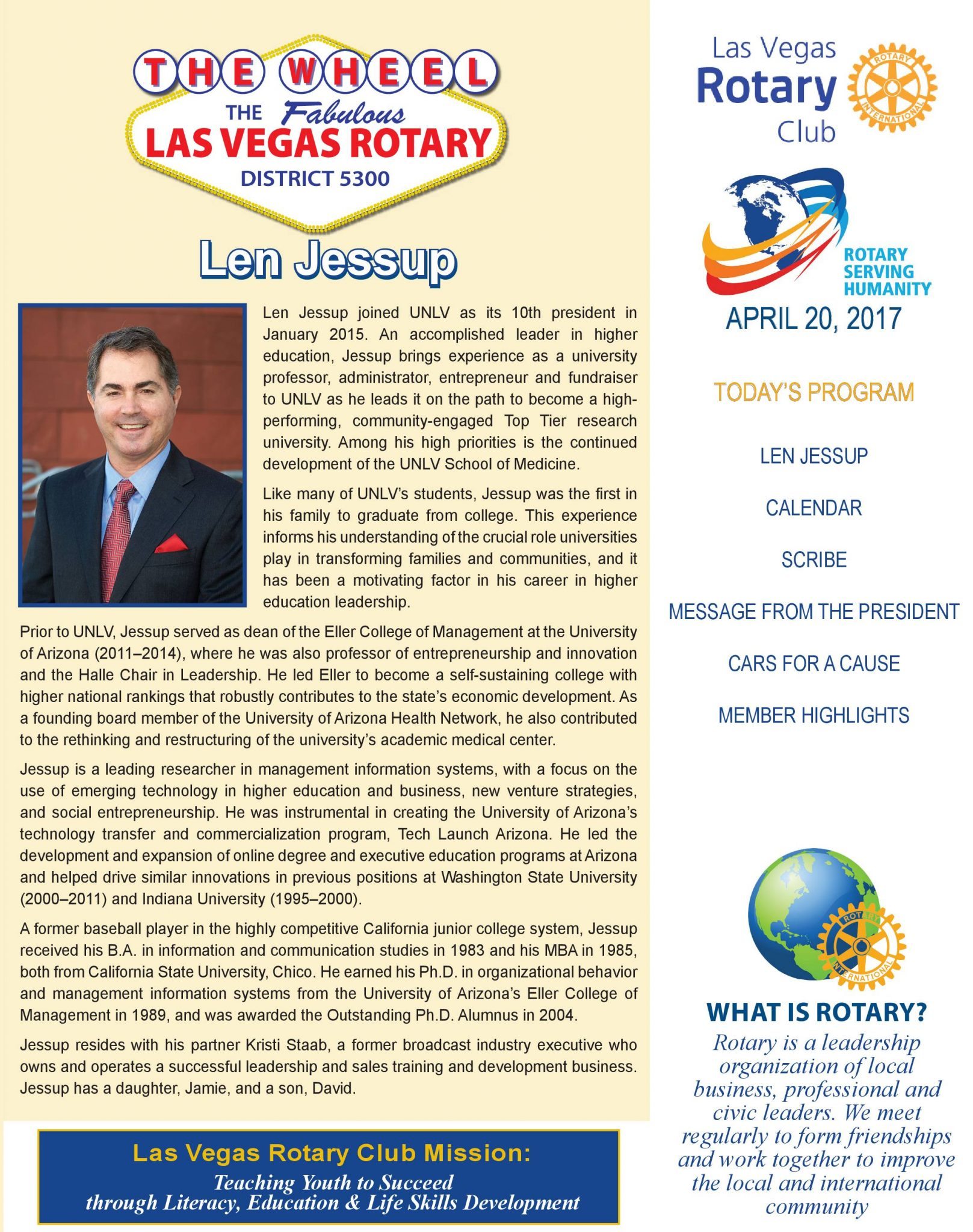 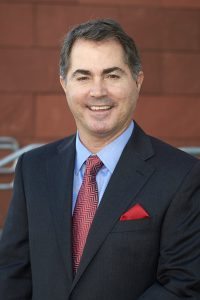 Len Jessup joined UNLV as its 10th president in January 2015. An accomplished leader in higher education, Jessup brings experience as a university professor, administrator, entrepreneur and fundraiser to UNLV as he leads it on the path to become a high-performing, community-engaged Top Tier research university. Among his high priorities is the continued development of the UNLV School of Medicine.

Prior to UNLV, Jessup served as dean of the Eller College of Management at the University of Arizona (2011–2014), where he was also professor of entrepreneurship and innovation and the Halle Chair in Leadership. He led Eller to become a self-sustaining college with higher national rankings that robustly contributes to the state’s economic development. As a founding board member of the University of Arizona Health Network, he also contributed to the rethinking and restructuring of the university’s academic medical center.

Jessup is a leading researcher in management information systems, with a focus on the use of emerging technology in higher education and business, new venture strategies, and social entrepreneurship. He was instrumental in creating the University of Arizona’s technology transfer and commercialization program, Tech Launch Arizona. He led the development and expansion of online degree and executive education programs at Arizona and helped drive similar innovations in previous positions at Washington State University (2000–2011) and Indiana University (1995–2000).

A former baseball player in the highly competitive California junior college system, Jessup received his B.A. in information and communication studies in 1983 and his MBA in 1985, both from California State University, Chico. He earned his Ph.D. in organizational behavior and management information systems from the University of Arizona’s Eller College of Management in 1989, and was awarded the Outstanding Ph.D. Alumnus in 2004.

Jessup resides with his partner Kristi Staab, a former broadcast industry executive who owns and operates a successful leadership and sales training and development business. Jessup has a daughter, Jamie, and a son, David. 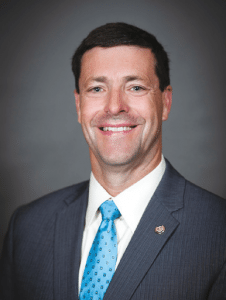 An Open Letter to Our Valedictorians

Rotary is where community leaders, friends and problem-solvers join together to take action and create lasting change. With over 1.2 million members in 34,000+ clubs around the world, Rotary is the original global service organization and is perhaps best known for its global efforts to eradicate Polio.

This Las Vegas Rotary Club was founded in 1923. Over the last 94 years we have contributed millions of dollars in funding and in-kind service to address problems both locally and around the world. Of particular interest to you may be the support we provide to Bracken, Beckley, Hollingsworth and Long at-risk elementary schools here in Las Vegas as partially demonstrated by the grant presentations you witnessed today.

Our motto is “Service Above Self”. This is the very heart and soul of Rotary. Most of the people in the world feel that they have achieved success when, through wealth or position, they can command the services of others; but the Rotary ideal is that real success and true happiness can best be found in unselfish service rendered to others.

So, as you move on in your educational and professional lives, I hope you take with you this Rotary ideal of service and give back to your communities.

A good place to start is in college. Many universities around the world, including both UNLV and UNR have Rotaract Clubs. Please consider investigating these as a way of enhancing your college experience and enriching your lives.

Congratulations on your amazing achievement! We know you are destined for success. 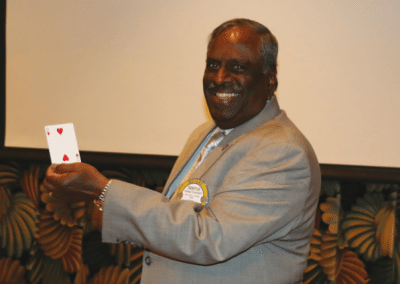 Dr Rampur Viswanath missed the joker followed by a lot or applause. 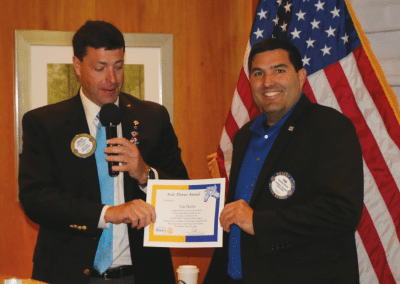 President Dave presented our speaker Tim Mullen of the USO with our Sole Power Award. 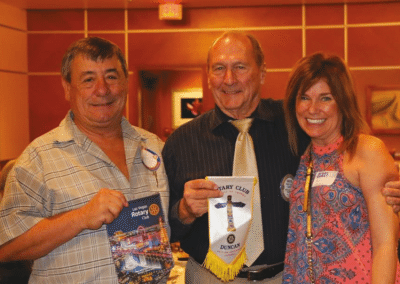 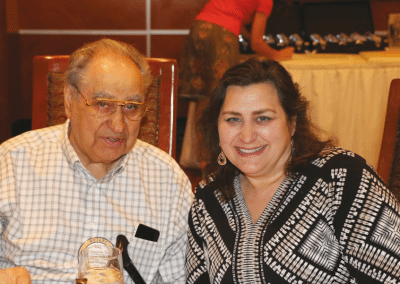 Dr. Kazem Fathie enjoys fellowship and lunch with his daughter. 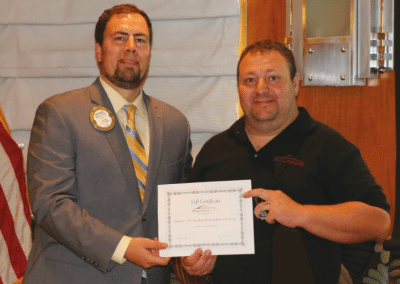 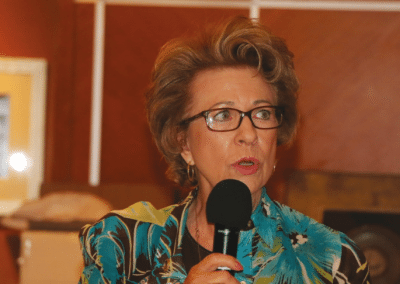 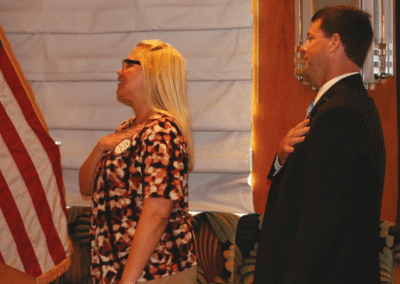 Jaime Goldsmith led us in singing the National Anthem. 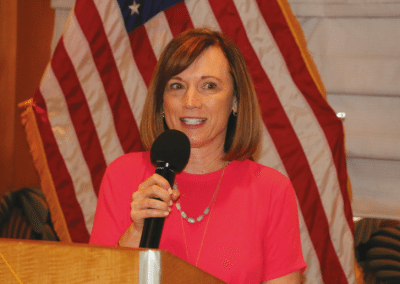 Pamela Lange from Spread the Word Nevada announced a $50,000 donation to build a Mentor Center at Beckley. 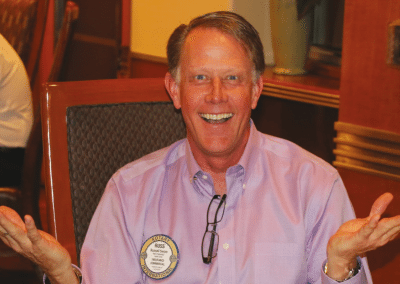 Past President Russ poses for the camera. Always looking for attention. 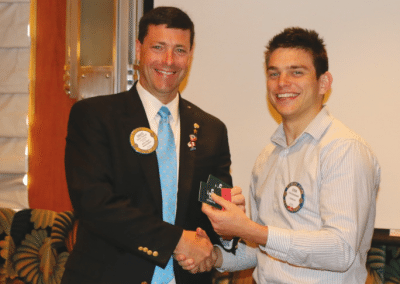 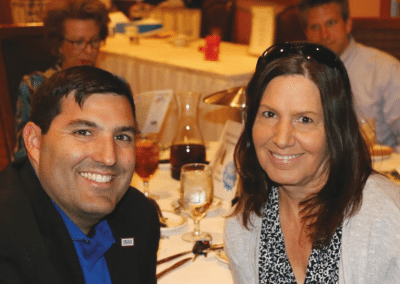 Our Member Speaker Tim Mullin has lunch with his mother Frankie. 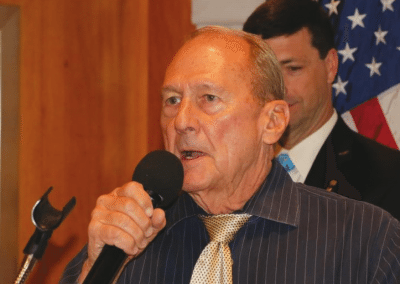 Past President Brock Fraser opened the meeting with his invocation.